I suppose it is also easiest to write about the things that have most recently consumed a few hours of your life. I'd write about how I just re-wrote the entire website generation code in Jinja2 and Python3 but that's not really all that interesting as it was basically drop-in.

So rolling back to things that I have worked with recently, you might remember this post from just before the holidays wherein I fought a bit with the two UniFi softwares to get them to use the same SSL certificate. I also that hinted that this was coming over here where I talked a bit about the experience of extending my UniFi WiFi network infrastructure to my office at work.

I bought the UVC-G3 camera in the same order as the newest AP with plans of mounting it to my garage. If you saw my original post on setting up UniFi in the first place you may have seen on the map view that I have a detached garage. Having a view of the driveway, side walk and yard and a bit of the front is certainly useful but this is also the most challenging location that I intend to have a camera. Currently the uplink is over the WiFi connection between the garage and basement APs and if you have been following the weather it has averaged about 9°F up here so being an un-heated and un-insulated garage this is the most environmentally difficult spot I've got.

I'm happy to report that the initial setup is very similar to the WiFi products. The controller software (apparently via a UDP broadcast) sees the cameras as they come up on the network and gives you the option to 'manage' the camera. As an alternative you can manually configure the camera to connect to your controller if they aren't on the same layer 2 network segment, or use the camera simply as an RTMP server. In managed mode the whole process is very similar to adopting a UniFi access point. Once you have the camera managed it will upload any new firmware that it needs along with some base configuration and reboot it a few times. Once that has settled down you can move on to the rest of the setup for the camera(s). The configuration is pretty slick and easy. You end up with 2 tabs to go through and in most cases the defaults are sane. 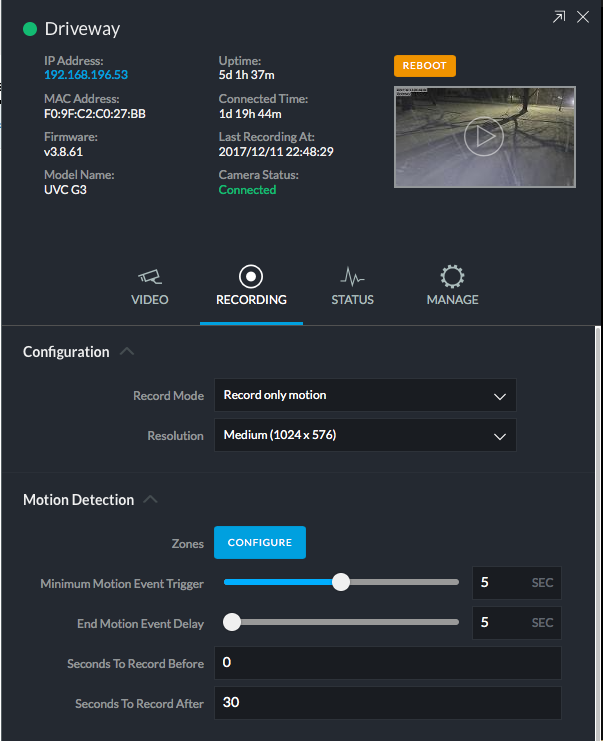 There are a couple options for recording as you might expect in NVR software. You can record always, never, on a schedule, or on motion. You also have a few options for retention, either time based, space based, or both. This ends up being pretty powerful and again the defaults are reasonably sane. 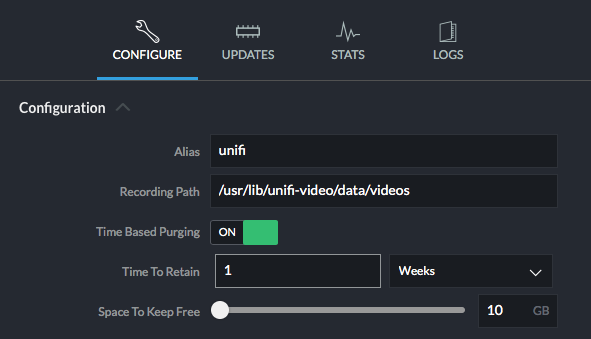 The most amazing feature that is bundled in the NVR software (for free, without any cloud nonsense, and without any strings attached other than needing to buy their otherwise very good cameras I might add...) is the motion based recording. From the camera configuration screen you can configure your motion detection zone. Once you hit configure you are presented with a live view from the camera that you can draw a boundary box on. 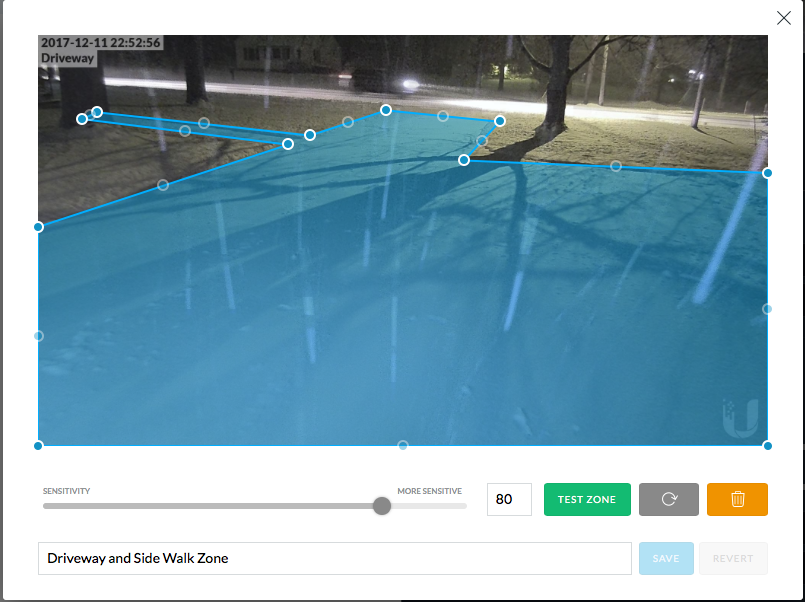 After adjusting the border of the area you can smack 'test zone' and... more awesomeness happens. The zone border disappears and instead you get the same live image but now detected motion highlighted in red is overlayed and a nice histogram showing the trigger threshold versus the amount of motion in the frame appears (red is exceeding the threshold, green is not). This lets you fine-tune the motion trigger sensitivity and hopefully keep false positives low. 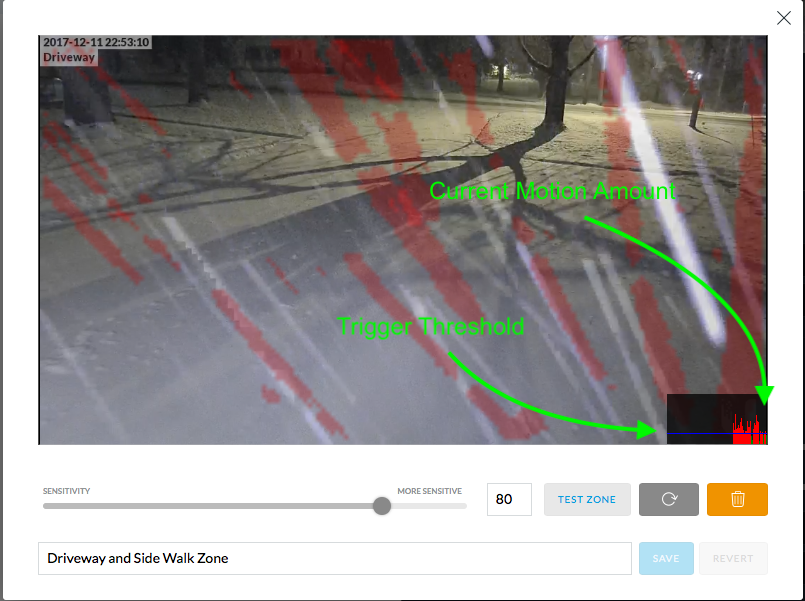 Once you are happy with your new camera settings you can tell the software to alert you once a recording is triggered and you will be presented with a nice e-mail with a snap of the frame that triggered the event.

So the setup process was reasonably painless. The software installed just about as easily as the WiFi software and configuration was almost alarmingly easy. It has been almost a month since I've gotten this all up and running and I have to say it has been basically hands off. The iOS mobile application works great, and thanks to the power of VPN I can watch live video and recordings from just about anywhere without having any of this accessible to the Internet at large. The camera itself uses h.264 and uses a little over 1 Mbps worth of network bandwidth. So far there have been some hiccups in connectivity thanks to the weather and the WiFi link, but nothing major and nothing lasting more than a few seconds.

The camera itself is really quite nice. Feels solid and comes with a very versatile mounting system. It was easy to aim and secure and has held up without complaint to our delightful weather thus far. The only irritation is that unlike most of the WiFi products, the cameras are still supplied with 24V 'Passive-PoE'. The garage switch does have 802.3af PoE, but I still have to use an injector in line. Not a huge deal here but I have some other locations where I'd really like to be able to power the camera via the local switch without more hardware in the line. There does appear to be a SKU for 802.3af capable UVC-G3 cameras but I can't actually find someone selling them yet. Perhaps in the near future they will appear and my only hardware gripe will go away. (fingers crossed)

So, tl;dr? Ok. This is just as rad as the WiFi, if you are in the market for a slightly more complex than 'consumer grade', powerful, and most assuredly not cloud connected surveillance solution then give this a serious look. You might be surprised. I sure was.

Docker and Flask Are… >>
<< Apple slowing your phone isn't a problem
Comment via e-mail. Subscribe via RSS.