I started listening on July 23rd (according to Podcasts.app) and have basically been blowing through several episodes per day since. There are something north of 90 episodes in the feed and I am within 20 of being current. If that isn't a glowing enough review to interest you then here is a brief synopsis.

The Adventure Zone starts out as a comedy roundtable / actual play ish podcast as three brothers and their father take a stab at playing a starter module for D&D. It's light and funny and clearly a learning experience for all involved. I stuck with it and after the first story 'Here There Be Gerblins' wraps up the first hints of what it will become are unveiled. By the end of the Balance adventure I was hooked. I very literally laughed, cried, and cheered aloud while listening. The production quality went through the roof somewhere about 1/3rd of the way through and the story very quickly left the known world and became something special and unique unto itself. The chemistry of the McElroy family is something delightful to behold and they do an amazing job of morphing D&D into something more consumable in podcast form. It really focuses on the collaborative story telling aspect with often hilarious and serious consequences of perpetually unpredictable dicerolls. I think almost anyone would take a shine to the Tres Horny Boys (as they named their group, accidentally).

As I said am not entirely caught up, I am just up to the start of the new 'season' which was preceded by several short story arcs written by each of the McElroys using different RPG systems and settings as they tried to figure out what they wanted to do for 'season two' but all the mini-stories so far have been really really enjoyable. 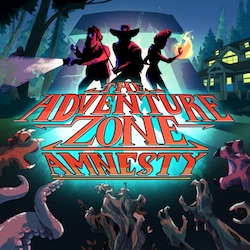 I implore anyone who might be reading this to check this out.

I also forgot to mention that the music in this podcast is completely off the chain.

Enabling MFA for SSH with Puppet >>
<< I guess I'm not using CarPlay...
Comment via e-mail. Subscribe via RSS.