Ages ago I built a FlightAware ADS-B feeder on a Raspberry Pi Model B Rev 1. To this day it is still running and happily feeding data to both FlightAware and FlightRadar24. Earlier this year I even built another feeder for the UAT variant. Well FlightAware finally released support for Raspbian (Debian) 10.0 (Buster) so I decided that it was time to upgrade. At first I started down the path of simply making a new manifest for Puppet which readers of this blog might recognize as my preferred configuration management utility. Well the two feeders I have are both rather under-powered and have pretty small memories. Since the SDR decoding process takes up so much CPU time and memory is already very thin running the Puppet agent just didn't make a lot of sense. It turns out that "look at Ansible again" has been sitting around aging nicely in my ~/TODO so I figured why not. 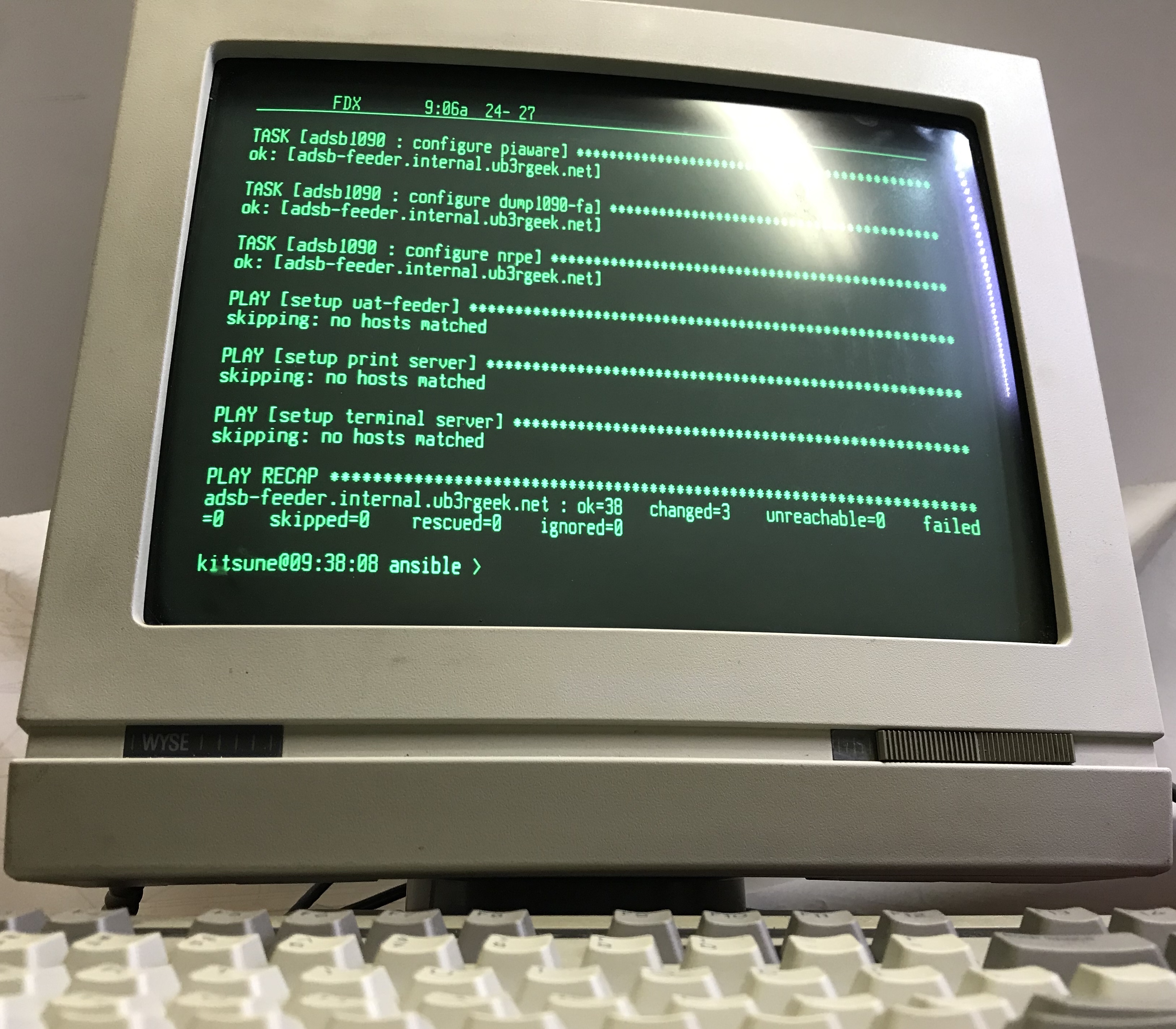 At first look I really do prefer the agent based setup of Puppet. The mutual TLS authentication adds a nice warm and fuzzy and the expansive custom module library means that I rarely find myself having to figure out how to manage stuff myself. Having augeas natively as a type in Puppet is also nice. The ansible-augeas module looks unloved and thus far I have not gotten it to work so I've resorted to going back and writing shell scripts to update config files. 🤮 That being said I pretty obviously prefer Jinja2 as a template system over the various Ruby-ish systems Puppet uses and in this case the lightweight ssh-driven approach of Ansible clearly wins out. I most certainly have not found a pervasive reason to start porting over the 6600+ lines of Puppet manifests that I have written already, but I see no reason I can't use Ansible to manage my small fleet of Raspberry Pi systems.

I went and read through the Ansible documentation and found it generally good though it takes a little while until it gets to the part where it tells you how to layout something more complex than 'install and start this single service with the default configuration', so once I got that sorted out I created a fairly generic common role that serves to provide a known-good starting point. Inexplicably there is a bunch of stuff installed by default in the Raspbian 'lite' distribution that is completely useless. I also restore the default Debian network functionality instead of letting a DHCP client configure static networking. 🙄 This is just basic systems administration 101 stuff like

Once that is done I start applying the ADS-B feeder configuration.

Since I have two separate feeders, one for ADS-B and one for UAT (see these previous posts for more information about them) I split the configuration into two separate roles so the common pieces could be centralized.

This sets up the FlightAware repository and adds some monitoring packages as well as sets up the blacklist for the kernel's SDR modules since both dump1090-fa and dump978-fa need direct access to the USB radio.

Here we configure the FlightRadar 24 repository and install all the ADS-B specific software. The credentials for all the services are stored in an encrypted Ansible Vault so I have to write out the config files from templates.
The entire playbook is in my git repo if you want to look at it, it's rough but it works.