I've been using iOS 13 since the public beta and have has some... unkind things to say already. I will pile a few other complaints on as an introduction here to set the tone. The most general one I have is that the random new animations in the UI that seem to periodically result in slowdowns or lost taps. iOS 13.1 had a horrible bug where it would not let you scroll while the selection animation was running in a list view (like in Mail), but at least that seems to be fixed in 13.2. Finally the continuing user anti-experience that I complained about in my impressions of iOS 11 post continues. It takes at least 3 taps to get anywhere useful in half of the stock apps now because of the stupid defaults views. Music and Podcasts are my most frequently used examples of this but the App Store is now totally useless. I don't even think there is a way to just list all the apps in a single category anymore. So good luck if you aren't searching for an app by name or looking for one of the 100 most popular apps out of the however many million apps in there. Good thing Apple doesn't lock you into their App Store for getting software on your device... oh... wait.

The most hilarious dumpster fire though, and the main topic of this rant is the combination of iOS 13 and macOS 10.15 (Catalina). Since they supposedly replaced iTunes and moved the sync interface into the Finder (hah, of course they didn't, they just re-named iTunes to Music and cut out a pile of features) I have been greeted with some really fun... behaviors. 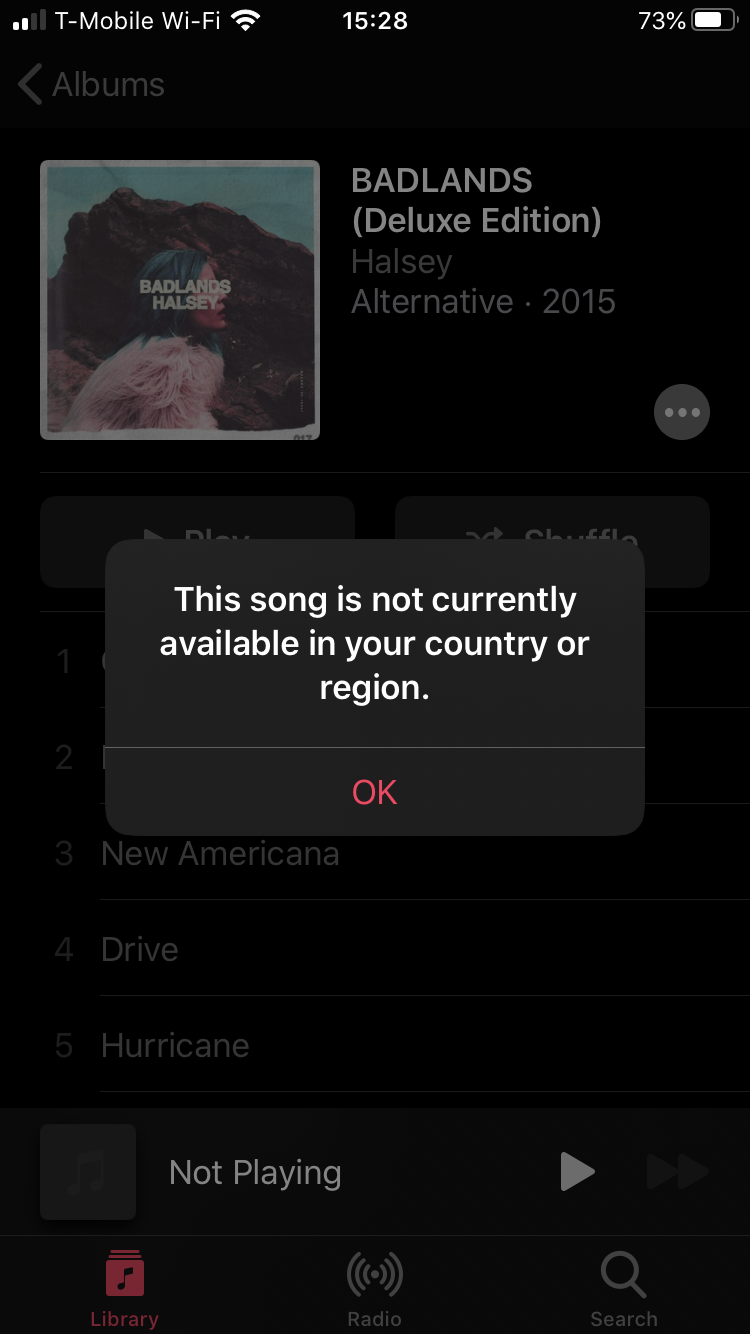 So I ditched my Apple Music subscription a while back and the only music on my phone is music that I own. Music that is in my not called iTunes anymore iTunes library, so that was a bit of a head scratching error message.

Turns out that somehow the phone no longer thinks that this album is on the device... 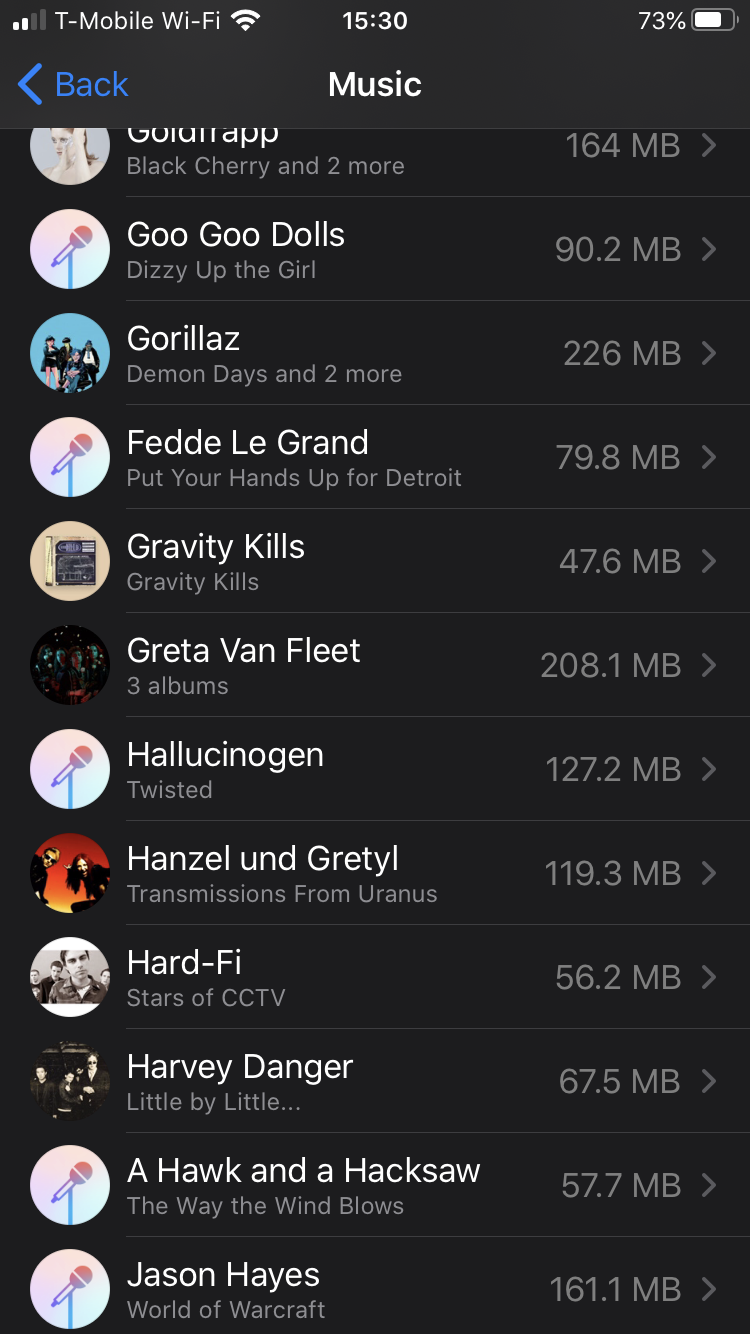 So of course I figure what the hell, I go into Finder and slam random combinations of 'Sync' and 'Backup Now' making sure the little swirly icon shows up and goes away on both sides (both over WiFi and with the USB cable) and in all cases there's basically no feedback of any kind of error but there are still clearly items missing.

Even more amusing, the laptop and the phone have two entirely different ideas about how much stuff is on my iPhone. 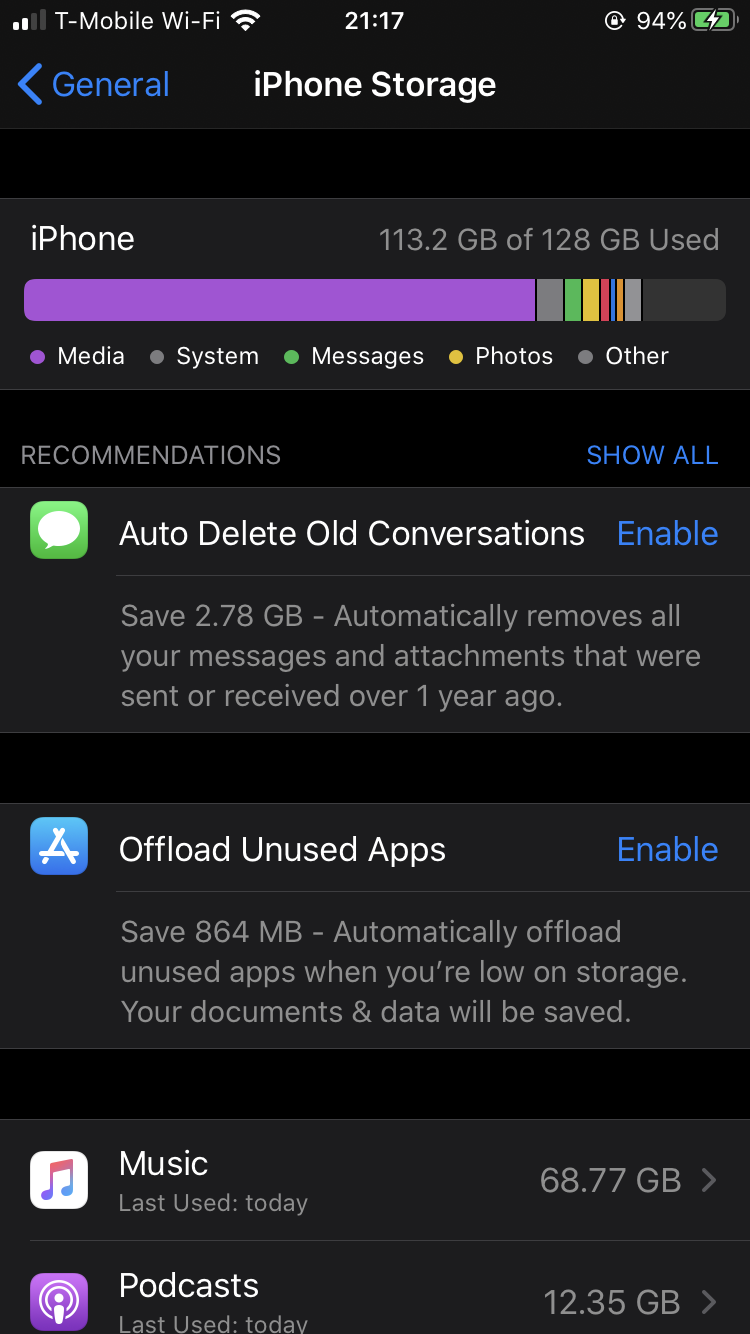 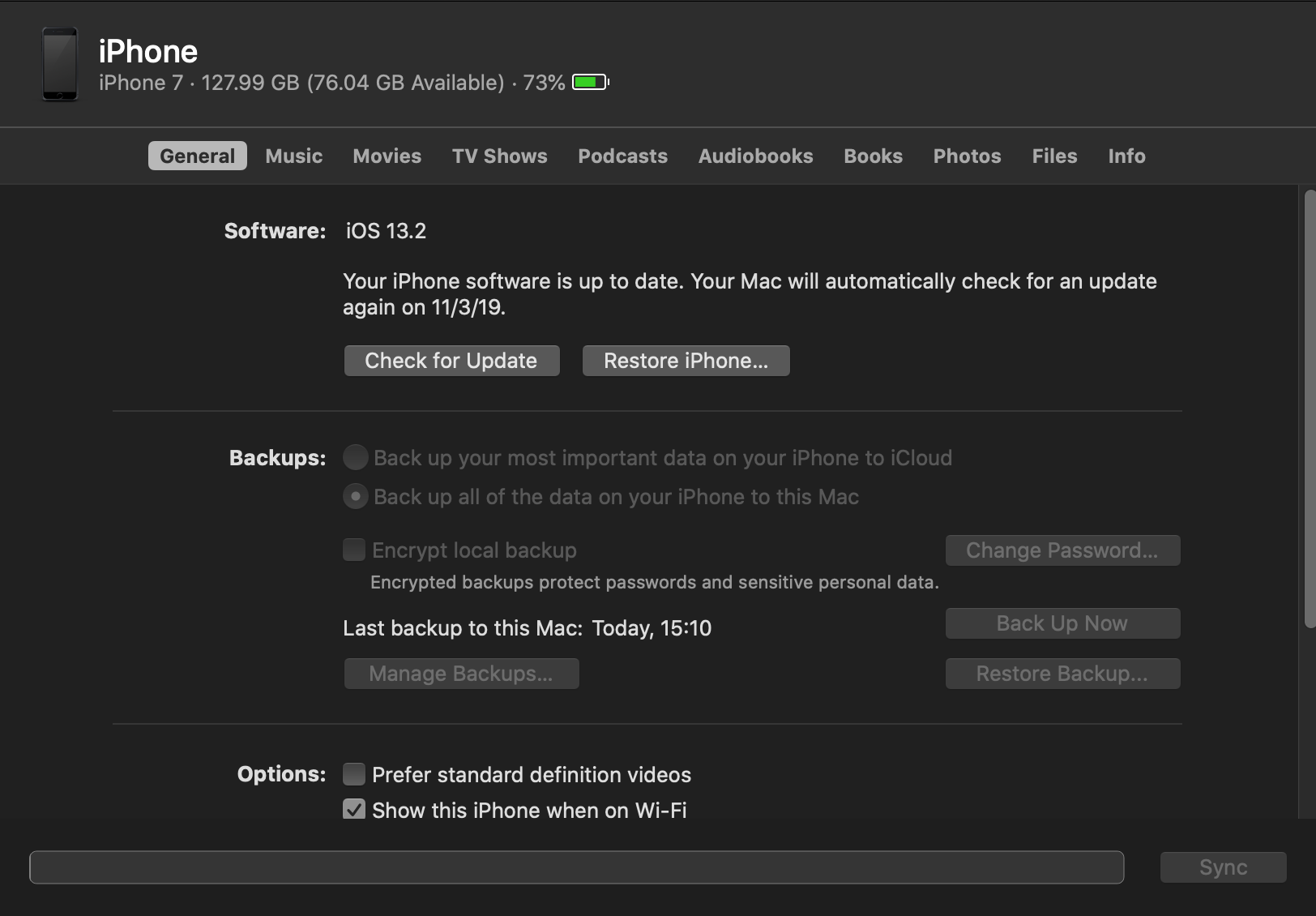 So I rebooted both the MacBook Pro and the iPhone and tried dancing with the sync buttons again but nothing changed. (╯°□°）╯︵ ┻━┻

I figured I'd make sure that iTunes Music on the Mac had the stuff listed in case the sync engine was doing the right thing but Music had lost its mind. (Not an unreasonable guess...) Somewhat shockingly though it looked like Music had things right. 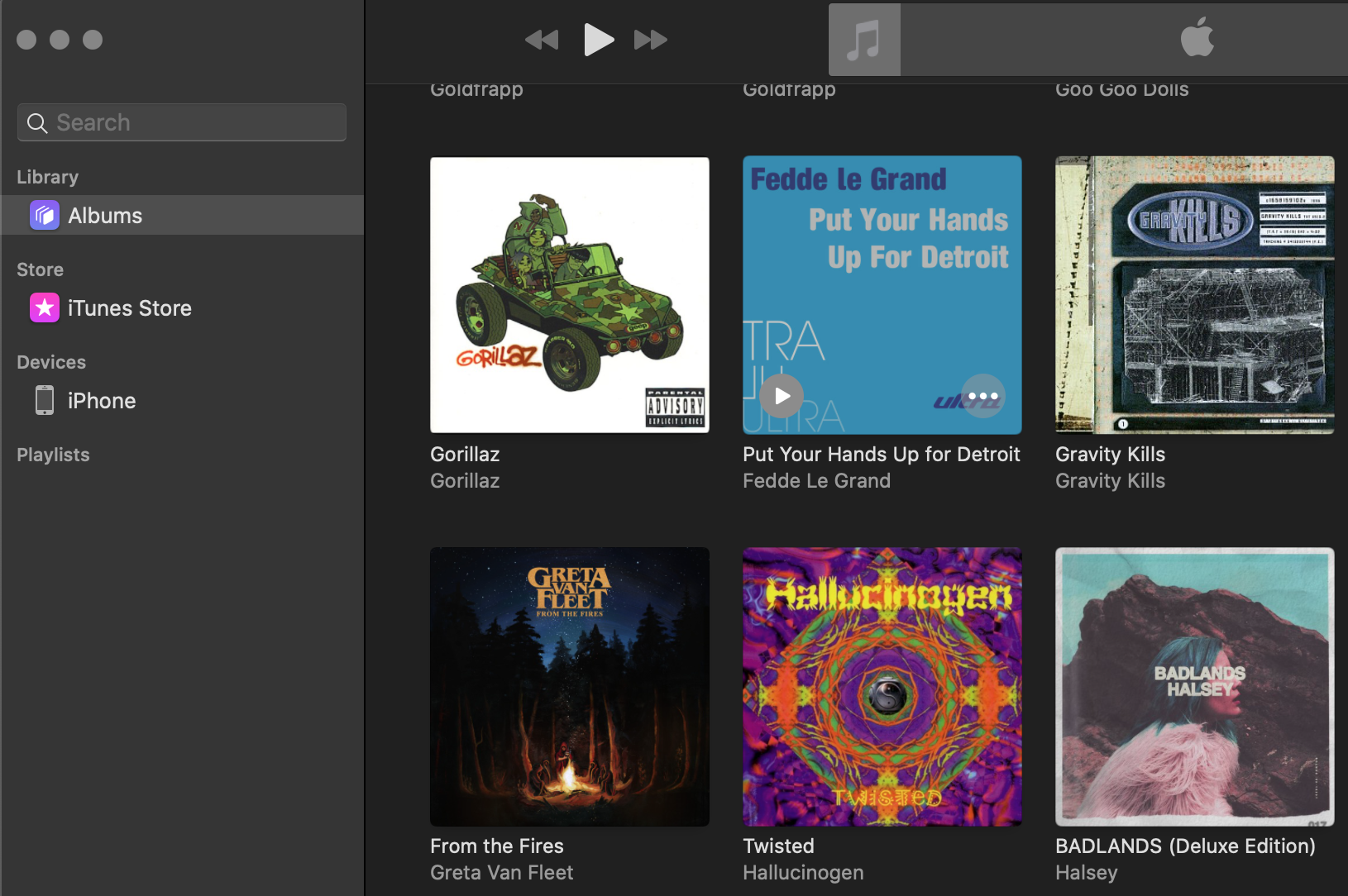 While clicking randomly on things in Music I noticed that it TOO has a sync option. Not the 'Sync Settings' button which just pops open Finder to your device with the 'Music' tab selected, oh ho ho no my dear user, if you right click on your device in the sidebar you get a 'Sync' option. 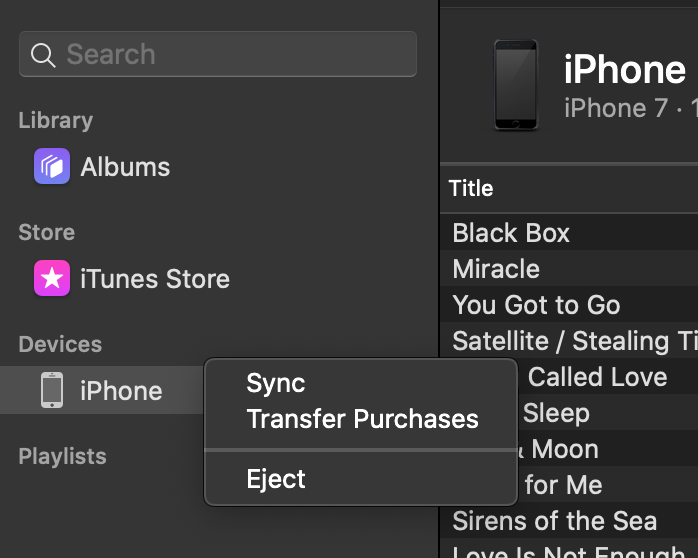 Low and behold after about 20 minutes of syncing (minus any real information about what it was doing other than a slowly filling and emptying circle icon) it looks like the library on the phone has been restored to working.

And they said iTunes was gone... 🙄

So if you find your phone is suddenly being brain dead with your music library, go give this a try.