About 8 months ago I augmented the AWStats based monitoring of my web sites with an InfluxDB, Grafana and JavaScript solution to collect user agent metrics. In looking at the data the thing that jumped out at me the most was the rate of adoption of HTTP/2.0 versus IPv6.

IPv6, the most recent version of the Internet Protocol (IP) was designed in the 1990s to replace IPv4 which dates from the early 1980s. These days most modern operating systems support both however the sheer size of the Internet has made adoption spotty at best. Meanwhile the Hypertext Transfer Protocol (HTTP) while being almost as old (work started in 1989) saw version 2.0 become standardized in 2015 and has had a much quicker adoption rate. The obvious difference is that HTTP is an application layer protocol riding several layers above the IP protocol and is therefore much easier to swap out.

The other slightly interesting thing is that my readers seem to be behind the supposed adoption curve of mobile device users. I assume that as a more technically oriented site that most of the people who are dropping by are doing so from a computer instead of a mobile device since it is generally far less casual. 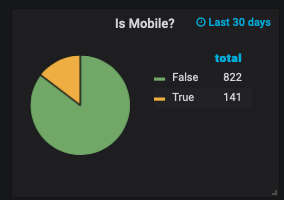 That is probably for the best, while I've done a lot to make the design responsive and work well on mobile it is kind of hard to read code snippets on mobile devices and of course since mobile device development is still a giant dumpster fire it wouldn't be super useful even if it was more readable.

Making an old iPad… >>
<< Expanding on my fragmented git hooks
Subscribe via RSS. Send me a comment.