I'm going to pick on a couple sites in specific but a whole metric boatload of the mobile web seems to do this crap and I'm sure there are thousands of words hidden away in private wikis about this particular user experience pattern and how great it is at driving app engagement or some other complete steaming pile of naval gazing wrongness.

I recognize that most people like apps, I don't. I also get that website owners want to associate their website with their app (and I remember watching a WWDC talk wherein some of the iOS security features may require this association), so they toss the <meta> tag into their markup and viola, this crap happens.

Now I will admit that Apple has improved this behavior, it feels like these banners don't appear as often as they did in previous versions of Safari / iOS but it is still something that you should be able to turn off.

Dear Apple, Let us compromise for the sake of sanity. We can just add a toggle in Settings.app -> Safari -> Advanced called 'Disable App Discovery' or some crap. Surely that isn't unreasonable or difficult?

I will give reddit a bit of credit here, they at least only seem to do this once. After you get the magic cookie that says you've made the obvious error of not getting their app they shut up. Unless you happen to be like me and periodically clean out your cookies and rotate your advertising identifier in the vain and silly hope that it makes it harder on the digital panopticon. 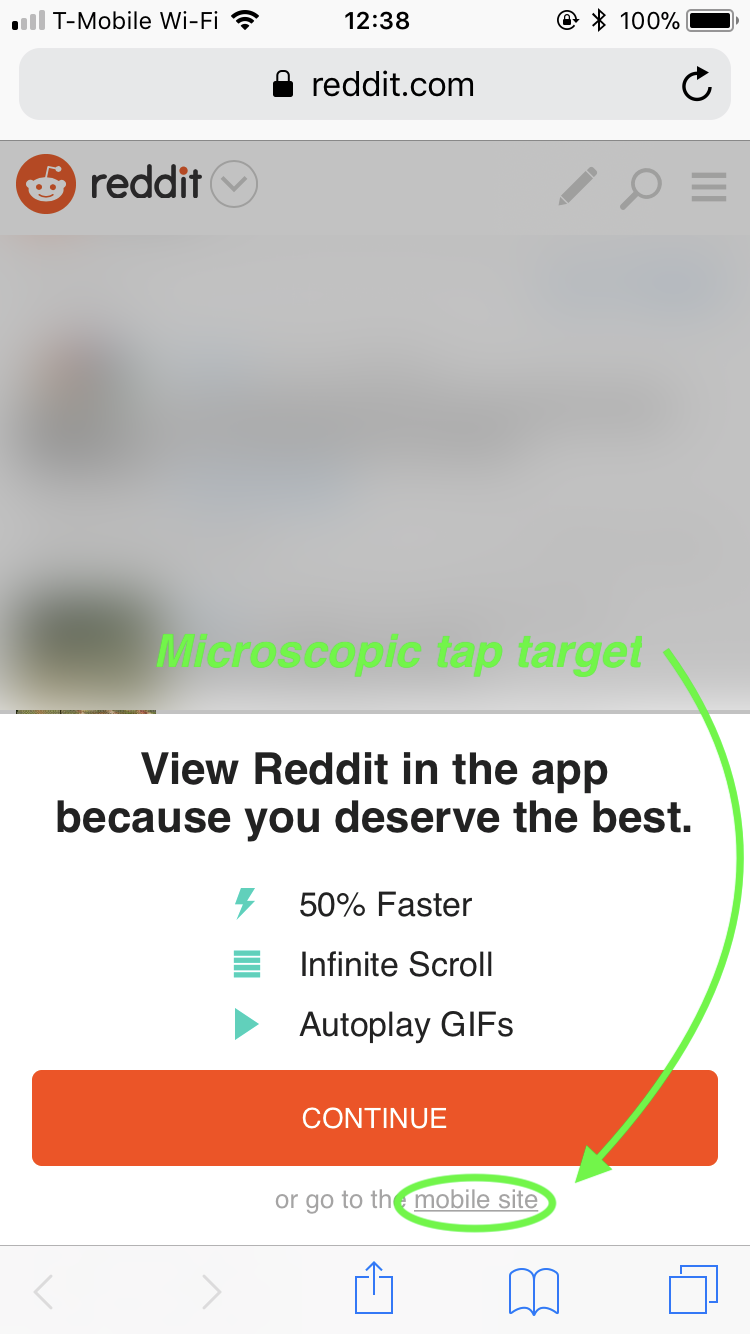 The part that bugs the crap out of me is how hard it is to hit that stupid link. Someone clearly doesn't actually want you to use their mobile website. 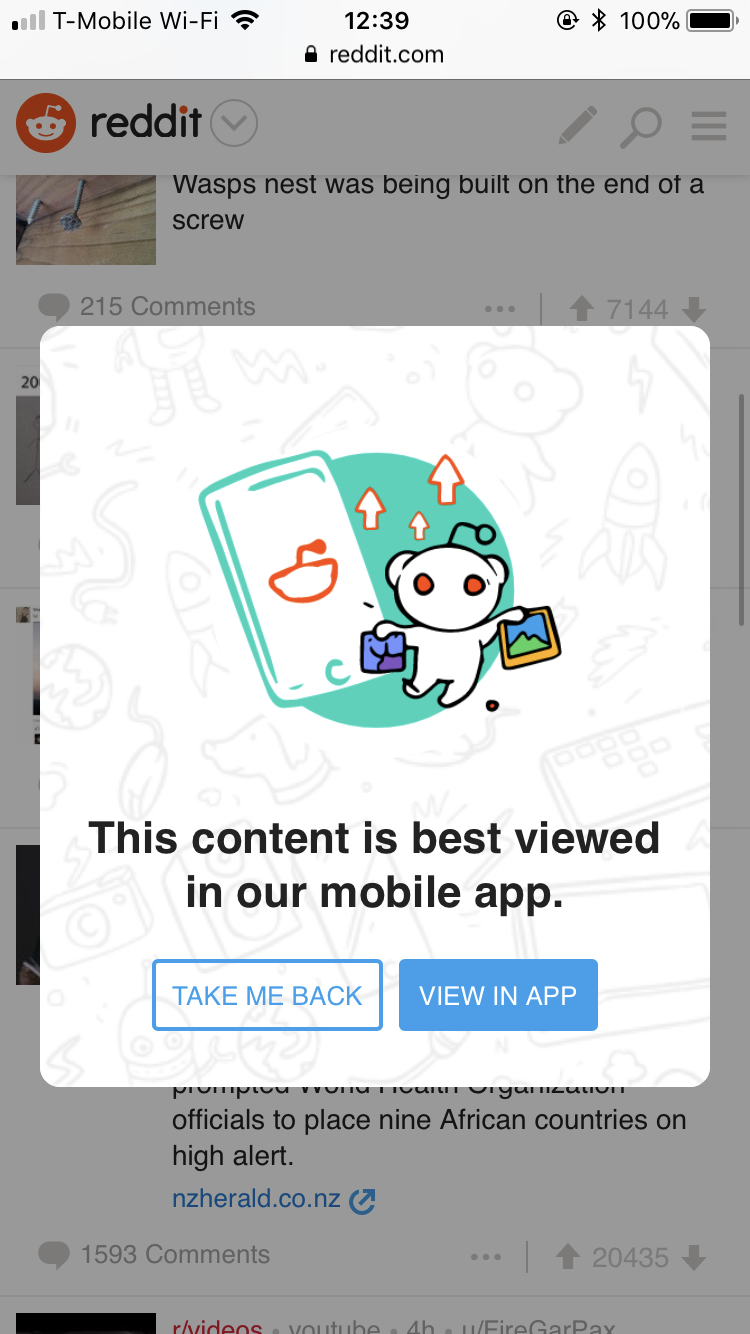 Oops! You clicked on something, time for some more disruptive and somewhat misleading 'user experience'. In this case 'Take Me Back' actually means 'Do what I told you and show me the thing I tapped on like I would expect you to do.' I guess that is probably too wordy to put in a button.

This one has that whiff of desperate basement dwelling neckbeard all over it. Like seriously, my mom uses my app, so you really should too. I won't fix your computer if you don't download my app and rate it 5 stars in the app store. 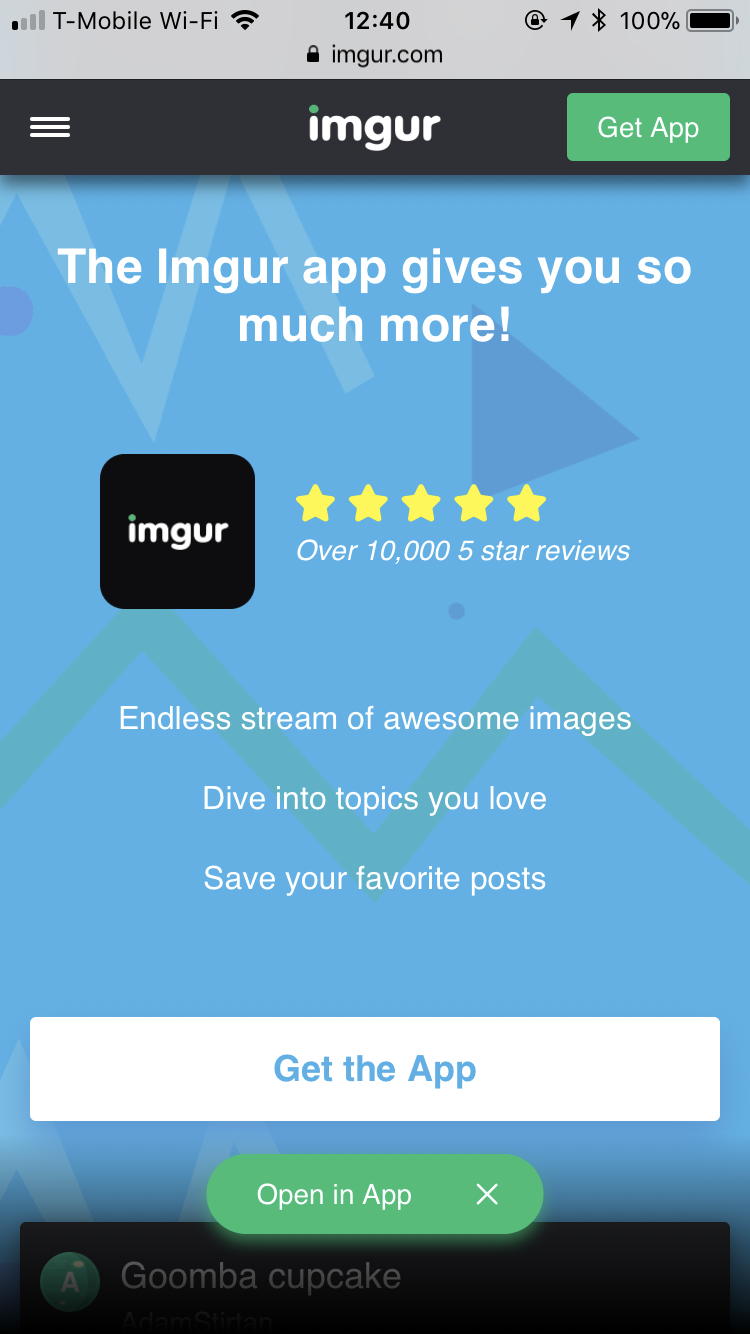 Lets see... button in the header bar, overlay button in the bottom with bonus points of 'tiny dismiss tap target' and huge screen-sized ad inserted in the content.

Yep, they really would like you to install their app.

An Open Letter To Web Designers

Dear People Writing Websites, Knock this crap the redacted off.

The really odd thing is that in a number of cases the mobile web sites are better than the desktop ones, and I'd have no complaints if it wasn't for this nonsense. Reddit is a good example of this. Their desktop website pales from a usability perspective compared to the mobile version and yet they feel the need to promote their app. I assume it is so they can better data mine your phone and sell you out for more profit, because I can't fathom what other benefit a native application would bring.

The beatings will continue until the situation improves.

Official soundtrack of this post: Pigface - The horse you rode in on