Shortly after Christmas I finally broke down and bought myself a MikroTik Wireless Wire kit to connect my network out to my garage. The kit consists of a pair of wAP 60G units pre-paired for a point to point link. About 3 years ago I installed several Ubiquiti UniFi access points, then after adding UniFi Video to the garage I swapped out a failing Linksys switch with a UniFi SW8-150. Throughout all of this the garage remained linked to the house via the UniFi meshing between the UAP-AC-MESH on the garage and the UAP-AC-PRO in the basement. This worked but was not fantastic as the meshing relies on WDS to extend the WiFi to the remote access point. Since WiFi runs over a single set of channels it is inherently half duplex (eg: the AP and the device both use the same channel for transmit and receive), and by extending my network in this manner the performance on the part of the property covered by the basement and garage access points was not what it could have been.

Honestly, I also wanted an excuse to try out the new 60GHz 802.11ad wireless stuff.

When I first started testing the link I mounted the unit on the garage and pointed it vaguely at the house. Mounting was easy, they came with a nice template with drill patterns and cable entry points marked out. The wall mount screws to the wall, your cable passes through a back side knockout (or several available bottom knockouts) and then a screw secures the unit to the wall mount bracket. On the house side I simply pointed the unit out a window so I could start testing the link. Once I ran a new CAT-6 cable back to my core switch I did end up mounting the house side unit on the exterior wall. 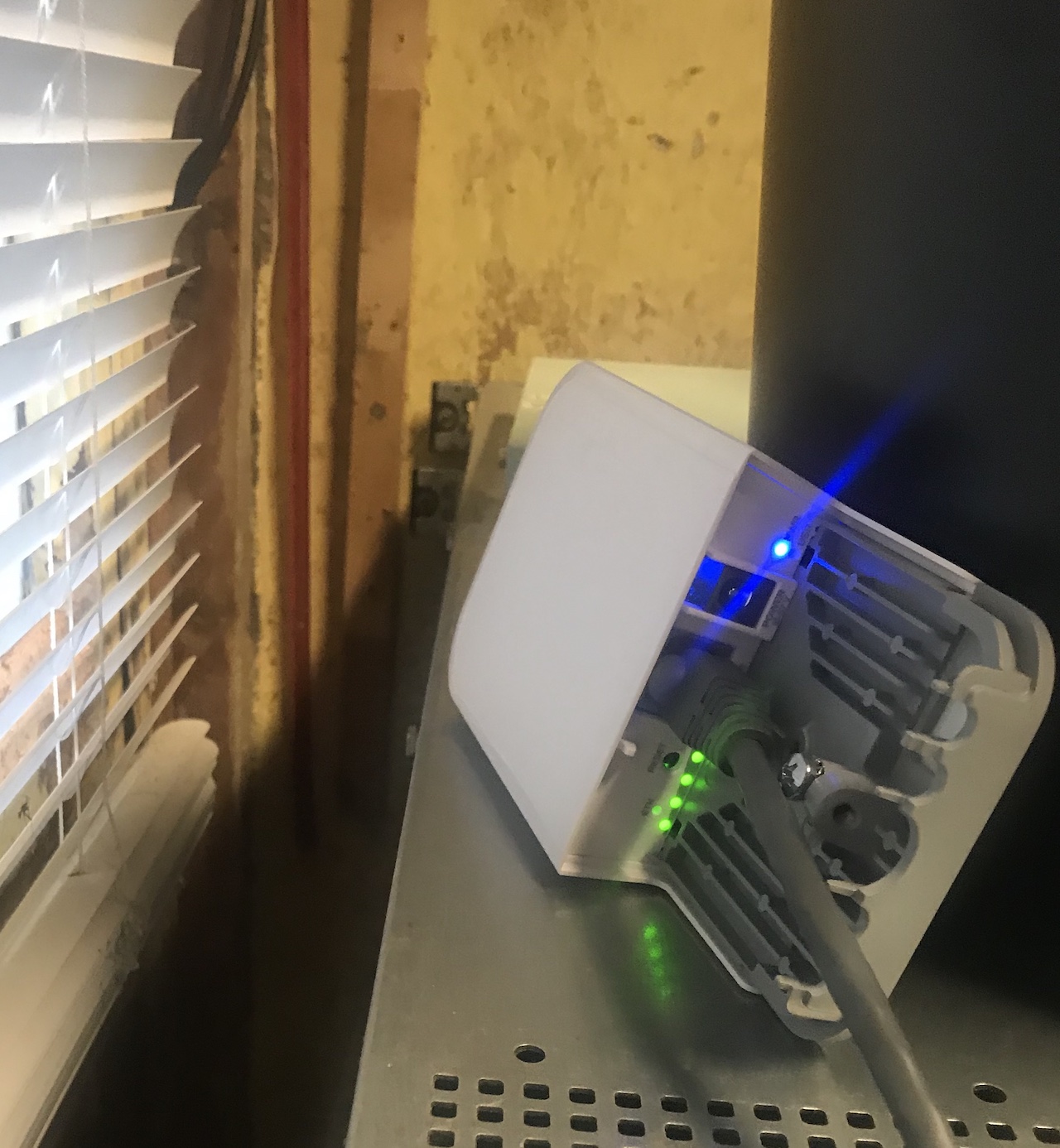 Initial setup was essentially zero touch. You have an LED bar graph on both units that helps you aim them and the 60° sector antennas are extremely forgiving. In fact the pointing of the units in my case is not optimal due to the constraints of mounting them on the walls of the buildings. They are aligned with the panels parallel to each other, but they are not aligned horizontally or vertically with each other (as you will see later on in the Grafana screenshot), and yet they came up with full PHY rate (2.3Gbps).

I did eventually go through and setup RouterOS with my defaults so I could monitor and backup the units but for the first month or so I left them just as they were straight out of the box.

The winter here in the north east has been quite variable. It hasn't been unheard of to have driving rain, fog, and snow all in the same day so this 60GHz link has gotten tested in a wide range of conditions that could interfere with the signal and I'm happy to report that I have not had any problems, drops, degradation of service, or even drop in PHY rate. My link is just under 12 meters (about 39 feet) which is well under the spec for maximum distance (200 meters), and it is a clear line of sight so I am a fairly ideal use case. I would expect it to be more sensitive out closer to the maximum and derate more often.

Once the data was in Influx it was trivial to create a Grafana dashboard.

For the price and the ease of use, I highly recommend this product if you have the need a short distance point to point link. The directional nature of the 60GHz band makes it ideal for this use and doesn't interfere with client access.