Don't get me wrong, this isn't a bad thing. The protections in modern operating systems are required for the interconnected (and hostile) world we live in. Computers are also powerful enough that you can afford to give the user an API instead of direct access to the hardware (with all the risks that come along with that). The real problem I have is when vendors decide to lock down their consumer hardware to prevent the user from running whatever software they would like on it.

I could easily go off on a rant about Android devices with locked boot loaders, or "smart" TVs with the unnecessary, non-removable, and often poorly supported, and under powered guts, or a myriad of the unfortunate decisions manufacturers are making these days. But that's not what has been bugging me lately. I, like many people if their quarterly filings and trillion dollar valuation is to be believed, have spent a fair amount of money on iOS powered hardware. I expect when I buy a thing that I can basically do whatever I want with it. Now I really do love the security by default stance of iOS but I also believe firmly that as the owner of the device, if I want to shoot myself in the foot, I should be allowed to peel off the warranty void if removed sticker and fire away. 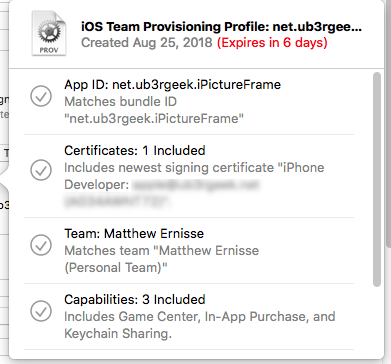 Of course the worst part is that it's not that I'm not allowed to run my own code on my iOS devices. If I have a Mac, and install XCode, and sign up for an Apple Developer account, then for 6 days at a time I can run something I wrote on the thing I bought. To be clear, I'm 100% fine with that being the App Store development experience, however what I want to do is write code for my own personal use on my own personal devices. I don't want any of this software to be transmitted to Apple to be put on the store, or sent in binary form to another person. All I want to do is run my own stuff on things I own.

Now I do understand that my particular use-case might be a bit outside the middle of the bell curve, but I think this is an expectation that isn't unreasonable. I would also point out that if you want to encourage people to learn to code, it might be a good idea to let them actually run their code, and live with it before trying to make a buck off it. In this world of launch early, release often and fix it in a patch release we really do need more people who are used to living with the choices they make. In my case I wrote a silly streaming audio player to help me fall asleep at night that requires a fair amount of infrastructure behind it, so I would never distribute it as a compiled binary, but I'd really like to not have to reload it on my device every 6 days. Similarly I have an iPad 1 and an iPad 2 that are basically useless but would make nice digital picture frames... if only I could run the app that I wrote for more than a few days without having to reload the code on them.

If anyone out there at Apple is listening, I'd really like a way to make my iOS devices trust my internal CA for code signing. Is that really so much to ask?