A little over six and a half years ago I left the Linux as a desktop community for the Mac community. I replaced a Lenovo Thinkpad T500 for an Apple refurbished late 2011 MacBook Pro and honestly have not regretted it.

Over the years I maxed out the memory, went from the 500G SATA HDD to a Crucial 256GB SSD, then put the 500G HDD in the optical bay, then upgraded to a Samsung EVO 512GB SSD with the optical drive back in there. I replaced the keyboard twice, the battery twice, and had the logic board replaced out of warranty for free by Apple thanks to the recall for an issue with the discrete graphics. Through all that it quite happily chugged along and for the most part just worked. Even now it's in better shape than most of my old laptops, but the lid hinge is starting to get weak (it will often just slowly close itself on me), it needs yet another new battery, and the inability to run the latest macOS lead me to conclude that it is time to look for an upgrade.

It ended up being a bit of a challenge to decide on an upgrade, though. I really like the 13" Retina MacBook Pro I have for work, I really like the portability of the MacBook, and the new MacBook Air looks like a great compromise between the two. I fought with myself for quite some time over what would come next for me and finally settled on a 15" Mid-2015 Retina MacBook Pro. Essentially the bigger brother of what I have for work. 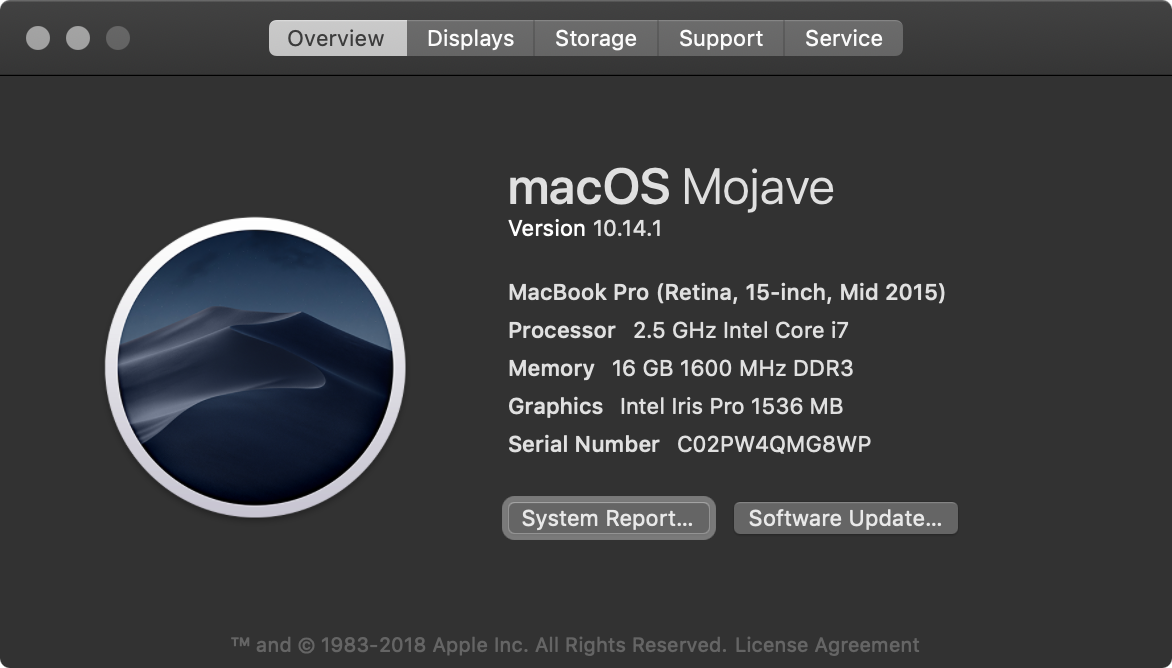 Now I won't blame you if you are wondering why I'd pick a 3 year old laptop over the latest and greatest. In the end it was almost the only choice. I wanted a 15" class laptop because I spend most of my time computing sitting on the couch. The 13" is really nice and portable but it's actually a little too light and a tad too small to comfortably use on my lap. That basically ruled out the lighter and smaller MacBook and MacBook Air. As for the newer 15" MacBook Pro, I almost exclusively use the vi text editor so not having a hardware escape key is just not something I feel I can get used to. I've also heard many people at work who do have the new MacBook Pros complain loudly about the keyboard so that was another nail in the coffin of the new models.

Given all that, the last non-touchbar 15" MacBook Pro is... the Mid 2015. I found a nice example with the 2.5GHz i7 and the Radeon R9 on eBay for a real good price after a few weeks of looking and snapped it up.

Since this is the second Mac I've ever had as my primary workstation it was the first time I got to use Migration Assistant. I have previously used recovery mode to recover from Time Machine which works a treat so I had high expectations. In the end I'd say the experience lived up to them. The only real problem I had seems to be related to how I have my WiFi configured. I use WPA2 Enterprise (so username and password authentication) on my main SSID which I configure using a profile in macOS (which also serves to disable Siri, a bunch of iCloud stuff I don't use, sets up my internal certificate trust settings, and my VPN). Every time I started up Migration Assistant it would drop off the WiFi with no explanation. After flailing around a bit it looks like that was because it couldn't access the authentication information after logging me out to start the migration, so I figured I'd use Ethernet. That would have worked except that the laptop showed up on a Saturday and the only Thunderbolt to Ethernet adapter I own was at the office. Thankfully my guest WiFi uses WPA2 PSK and that actually appears to work just fine. 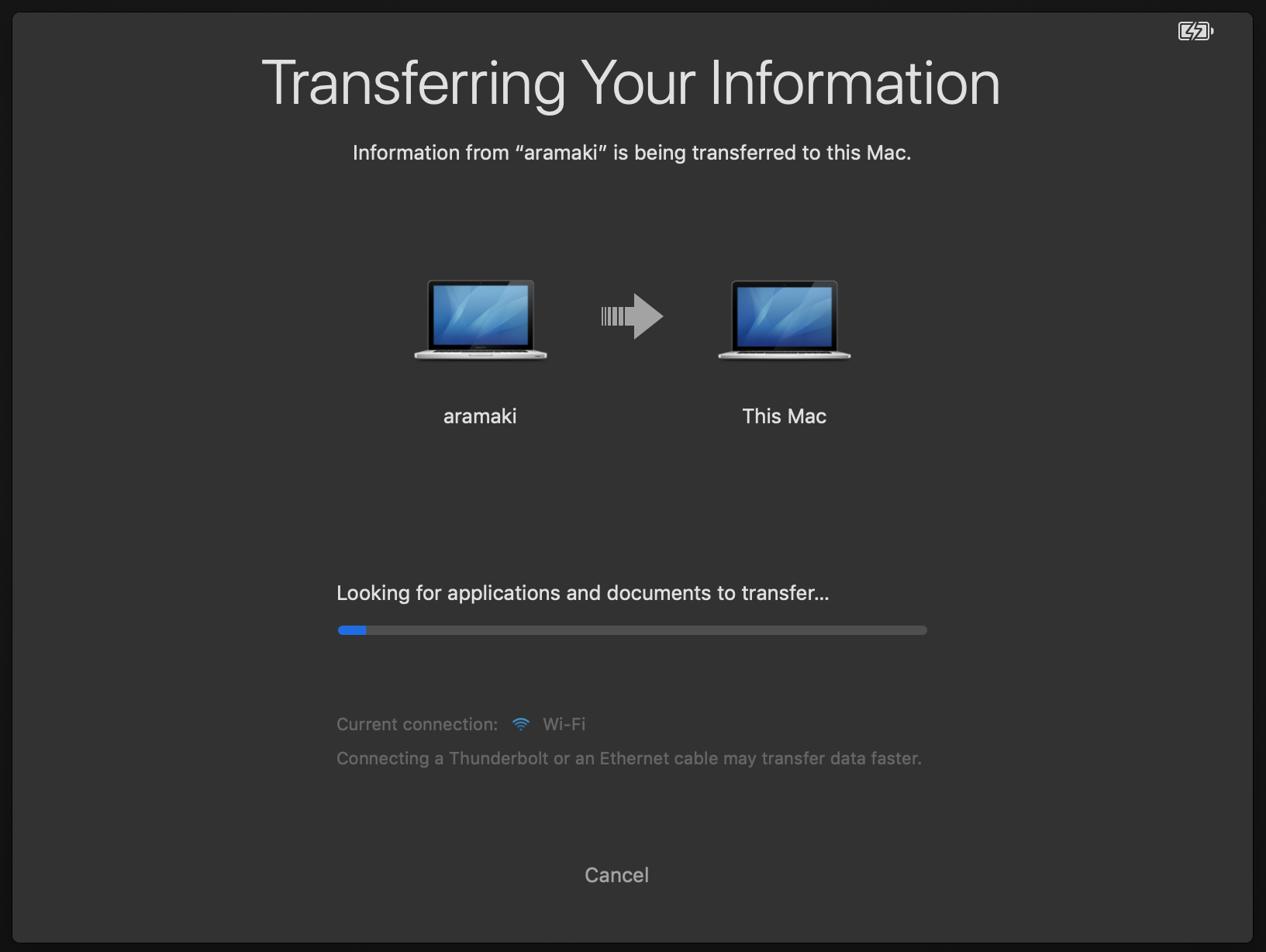 It took about 4 hours to transfer the 210GB or so of data, but afterwards the new Mac looked just the same as the old Mac. A quick run through my customization script to catch the few settings in the new version of macOS, the automounter, and the applications I have installed via homebrew, I have not had to go back. Sunday evening I shut off the old laptop. I do plan on re-deploying it as a test workstation if I ever get around to building a dedicated test environment, but for now it is sitting in a drawer under my desk.

It's been a good laptop and this new one has big shoes to fill. 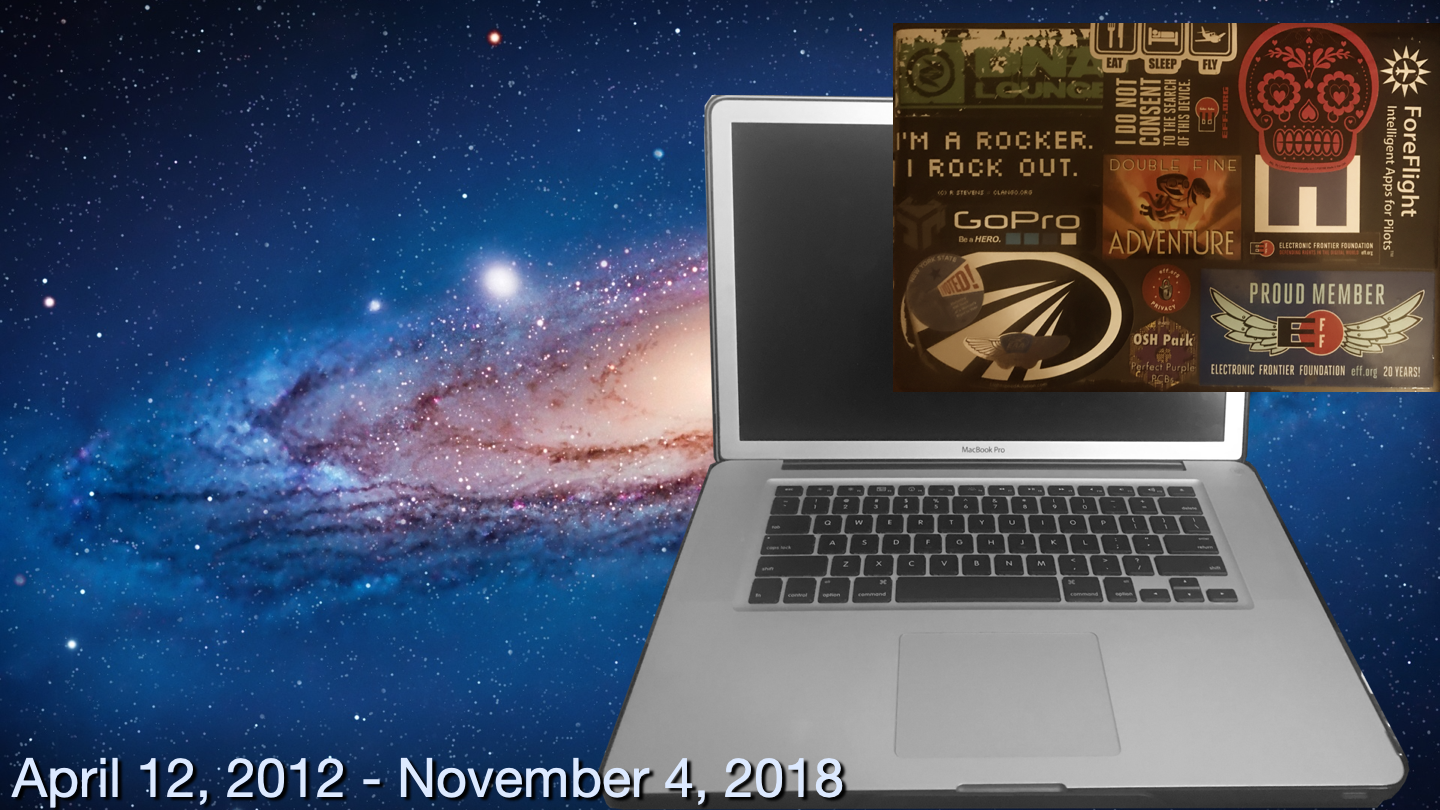