I've been going over the various things that have crept into my day-to-day computing and evaluating them. In some cases I've found things that needed maintenance (perhaps a future post about refactoring my mutt configuration is called for), and in others I've taken the opportunity to evaluate alternatives.

To understand the context of what's to come I think it's useful to give a little insight into how I use computers. I spend a lot of time in terminal windows. I settled on 80x46 (ish) as a default size over 20 years ago because it fit well on the monitor size and resolution of the day and even though I've moved on from 2048x768 on 17 inch 4:3 monitors [1] to 5120x1440 on 27 inch 16:9 monitors [2] I still find the size works well. I tend to also have a full screen terminal kicking around for when I get absorbed in something that doesn't need a GUI application (eg: writing software that doesn't emit a web page). I tend to go through phases of lots of windows versus lots of tmux windows depending on how focused I am.

It turns out that I rarely use GUI apps other than browsers. I do find it funny that time has moved on enough that the kids have taken to call console (or terminal, the nuance of the differences are even older than I am) applications 'TUI apps', highlighting I guess the fact that now the GUI is the default mode and that the outlier is an application that just uses text as opposed to only two short decades ago when the opposite was true.

I taught myself to program on Borland Turbo Pascal which was a typical DOS screen editor / IDE [3]. For those who aren't familiar most DOS editors (post the edlin era of line editors that is) were composed of text character based graphics and featured mouse support and drop down menus and dialog boxes. They were a precursor to, and existed along side Windows applications. When I moved on to Linux I started out using a similar style of editor before eventually falling into vi. It just so happened that one of my first IT jobs was wrangling Sun hardware and vi was installed by default while my previous editor was not. It was a steep curve at first but I now have over 20 years of muscle memory carrying me along. I have tried GUI editors over the years but I just don't like them. 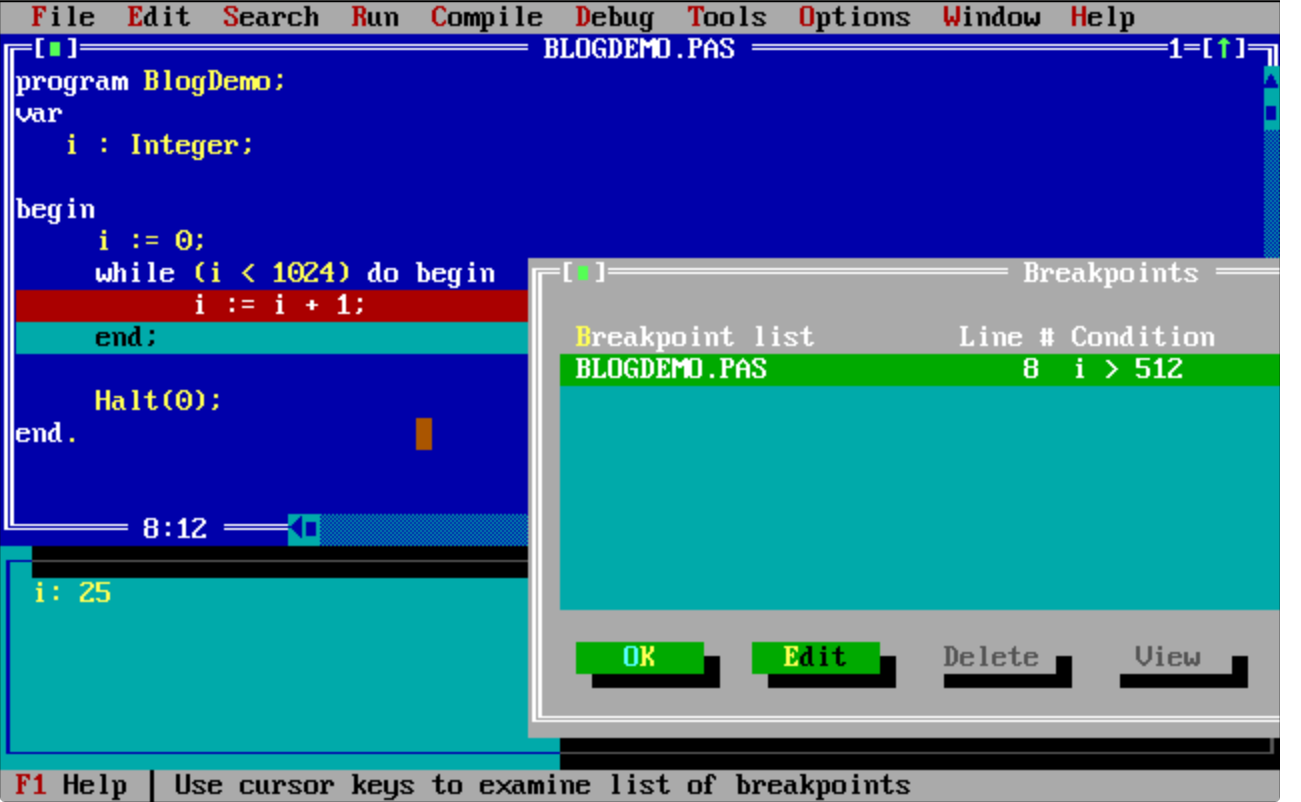 The remaining editor that I never really gave a try was Emacs. I've been aware of it all along, it was impossible to grow up online before the Internet became popular and not at least witness some of the vi versus Emacs holy wars that took place just about anywhere one could have a conversation. I never really understood what all the fuss was about, being happy to have a tool that gets the job done and all.

So, I switched to Emacs for about a month. I honestly gave it a solid try, trying not to use vi at all. At first it was very difficult to stop the various habits of using a modal editor, constantly whacking the escape key before moving the cursor around, or trying the old standby commands like >} or dG. After about a week things started to settle in, though I found myself using M-x a lot. One of the key things I wanted to do was to get used to how Emacs worked before I went changing it with things like evil-mode or drastically re-binding keys. I even went so far as to cobble together a couple Emacs Lisp functions that produce the boilerplate for both blog and gemlog posts. I eventually even went so far as to start screwing around with lsp-mode, which starts turning Emacs into a full on IDE. 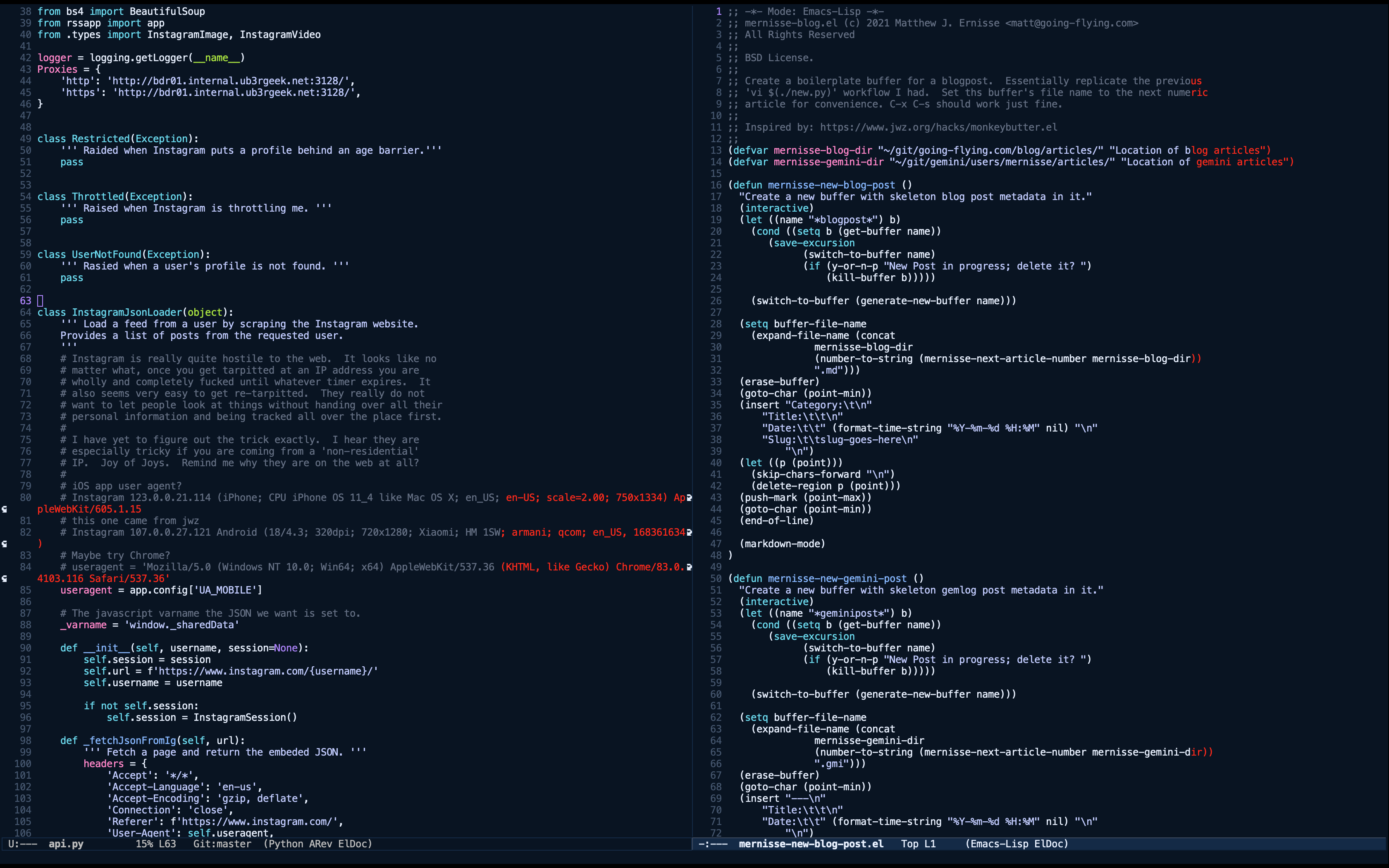 And around this time the strain on my pinky started to set in and I discovered the main philosophical difference between Emacs and vi. Vi is a UNIX tool. That is to say it aims to do one thing, well. That thing is editing text files. You combine it with other tools like tmux and mutt and slrn and you get the ability to edit files, read and compose e-mail and USENET news. With Emacs you do all of that in Emacs. Emacs has modules to do all of those things and more. It is less a text editor and more a framework to build applications upon.

So what did I think?

Emacs is a mature and still vibrant piece of software. There are many enthusiastic users and developers out there. It is available on just about every operating system these days and is customizable beyond anything most people would ever care to do with it. If I were to point at two features that stand head-and-shoulders above literally any other editor I have ever used, including things like VSCode and Sublime Text it would have to be magit and tramp. Seriously. The power that comes baked into the editor in just those two things is frankly astounding. The fact that they are built as Emacs Lisp modules is a testament to the power of the language and environment.

It's sort of hard to explain, the beginning of the end of the experiment came when I discovered myself losing some of the muscle memory for vi. I admit it scared me. I felt like I had to make a choice. Now part of this is my insistence of trying to work with the default key bindings in Emacs to get a sense of how the software wanted to be used but it sort of became more than that. I felt like I was about to have to make a broader decision than I was really prepared to. Did I want to give in and embrace the do-everything-in-here mentality or keep my box of bespoke tools.

There were other things I never quite got right either. I couldn't quite get Emacs to handle indentation the way I prefer (I'm a hard-tab guy, don't @ me) and that was starting to cause issues with Python scripts which is the most common language I use these days. I was also starting to get cramps from using CTRL and ALT so much (even after re-mapping Caps Lock to CTRL). I don't think of those as deal breakers though since I'm sure there are ways to bend Emacs to my will and fix them, it will just take time.

So according to M-= I am 1127 words into this and I suppose it is time to discuss where I've decided to go from here. I have written this post in Emacs as a nod to the conclusion which is that I intend to go back and try to live with both. There are just too many situations where I want a real bourne shell and the terseness of vi, but the power of Emacs, especially the IDE features and the VCS features of magit are just too tempting. The beautiful thing is that with enough tweaking I really hope to have both.