The last few days have been notable largely thanks to the premature failure of a Samsung Evo 860 SSD which corrupted my Windows 10 install. A bunch of faffing about later (in spite of the fact that I have my PC backed up using the built-in Windows backup feature) I found myself having to setup up my user profile again. I should note that I stopped using Windows regularly in the XP time frame so I'm not particularly comfortable with it, but I keep this one system around to run games since gaming on macOS or Linux is for the youth who have not realized how precious their time is yet.

Anyway, I use pass, the standard unix password manager to keep all my passwords on all of my devices and while on macOS I just use the command line version on Windows I wanted a browser extension since it just seemed like the Windows way and opening up cmd.exe every time I needed a password seemed cumbersome.

It turns out that there is a Firefox extension but the install instructions for Windows are... lacking. This is what I did to make it work.

pasff requires you already have a functional password store so we need to do that first. You need to install the following software.

Get the latest release version of everything on this list. Python, Gpg4win, and git all have installers so use them. Make sure that if any of them ask if you want to add them to your PATH you say yes. At this point if you are using an existing password store, you will want to import your GPG public and private keys.

The easiest way I found to accomplish this part was to install PuTTY, ssh into my macOS machine and run gpg --armor --export $(<~/.password-store/.gpg-id) and gpg --armor --export-secret-key $(<~/.password-store/.gpg-id). I copied and pasted the output (including the -----BEGIN PGP ... BLOCK----- and -----END PGP ... BLOCK----- parts, they are important) into two files on my Desktop and imported them using gpg --import %HOMEPATH%\Desktop\New Text Document.txt and gpg --import %HOMEPATH%\Desktop\New Text Document (2).txt. (Yes, I just right clicked on the desktop, said New -> New Text Document twice, opened each in notepad and copy and pasted out of PuTTY. I said it was easy, not clever.)

The key to all of this is gopass which is a re-implementation of pass written in golang. We won't go into my incredulity of re-implementing a shell script in a compiled and statically linked language that results in a 13MB binary but anyway...

Like so many things people ship written in golang, gopass does not have an installer. It gives you a zip file filled with stuff, most of which you do not need. In fact all you need is gopass.exe and you should put it... somewhere. I made a directory called .bin in my %HOMEPATH% and put it there. Once you have done that you need to add that location to your PATH (press the Windows key on your keyboard and then when the start menu pops up start typing 'path'. You should get a result which will open the magical control panel which will let you add this folder to your path). 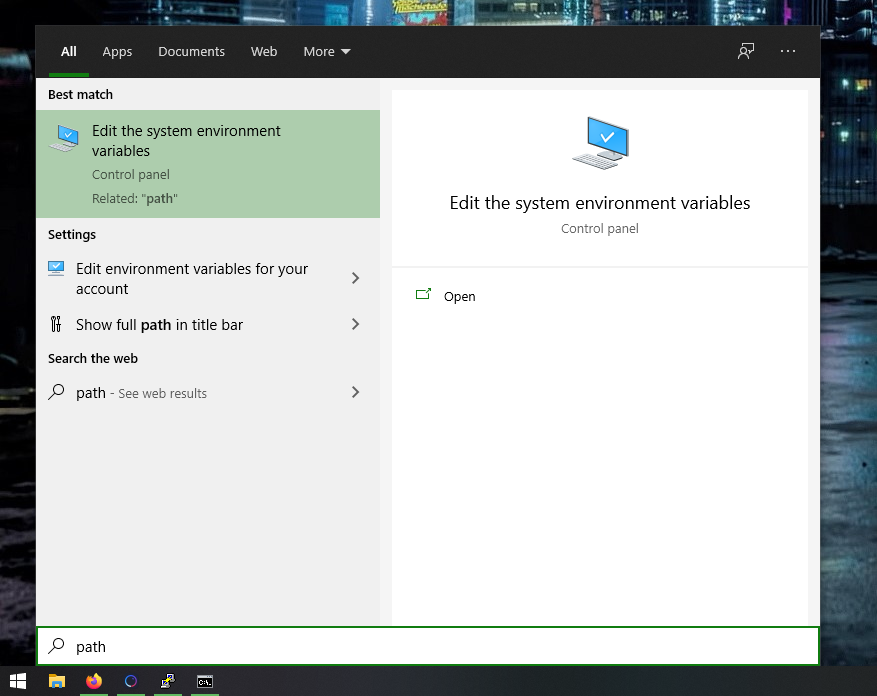 You should now be able to open up cmd.exe and run either gopass clone https://your.git.repo or gopass init to get yourself a working password store. Once complete gopass ls should list your stored passwords.

There are two pieces to the Firefox extension, the first is the actual extension that runs inside Firefox. You can snag this from the official Mozilla add-on page. The second part is what they call the 'host application', which seems to be a bridge they wrote between the Firefox extension and the pass program.

Install the Firefox extension first and then run the install_host_app.bat from the passff-host page.

Now that you have all the parts installed you are super close to the end. You have to edit the 2 files created by the passff-host installer and you should be good to go.

This is the file that actually gets run by passff, I don't know why it exists but it just calls the passff.py that we will edit next. By default it changes the PATH and calls the python using a hardcoded path. This is silly. Make yours look like mine does. You can find it in %APPDATA%\passff\passff.bat. I just used notepad because I'm not interested in an editor holy war, it comes with Windows, and it works just fine. 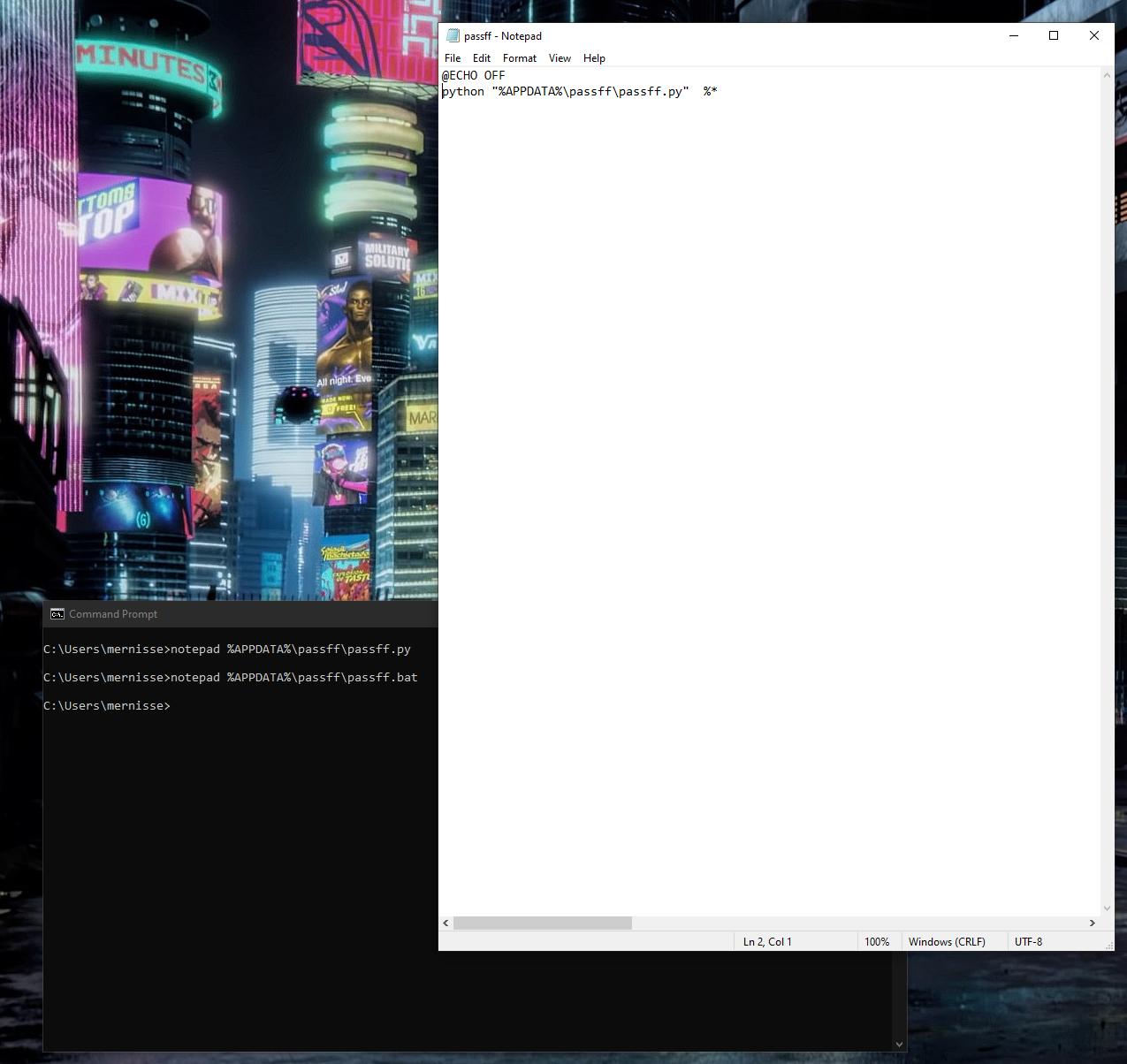 This is 3KB of python that takes some funky JSON looking stuff as input and converts it to some funky JSON looking stuff on the output. I assume it is to make the Firefox extension happy. Anyway, you just need to change the program it calls from pass to gopass and the default action from show to ls. Again, see below. You will find passff.py in %APPDATA%\passff\passff.py. 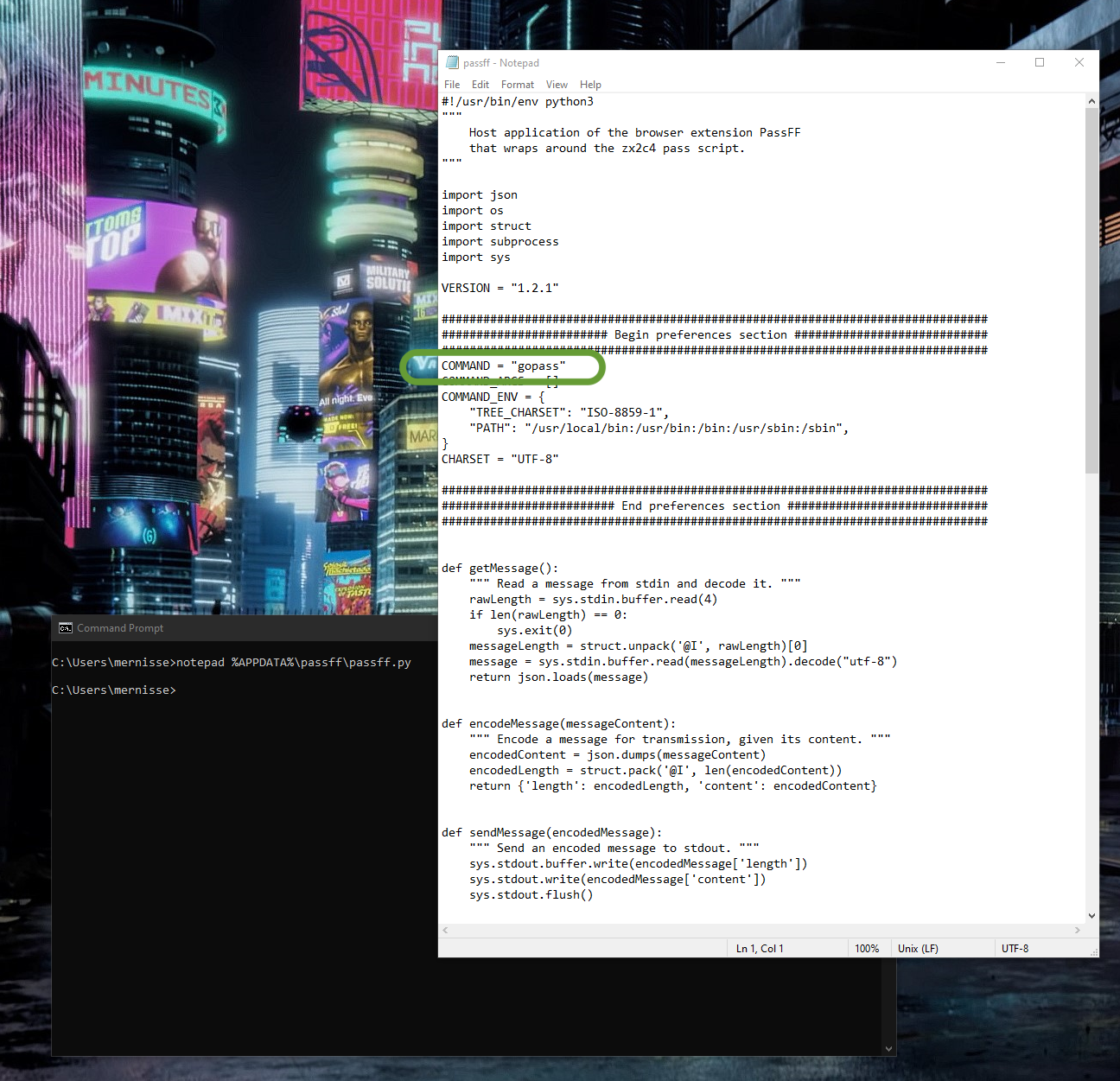 You should now be able to restart Firefox and the extension should work for you.

If the extension shows an error at the bottom of the popup, try the following. Open a command prompt and type echo [] | %APPDATA%\passff\passff.bat (that is "echo" five spaces then "[]"). It should give you some idea of what is going wrong. These are the two things that I ran into. If it emits a bunch of stuff kind of like the below then the problem is with the Firefox extension itself somewhere. 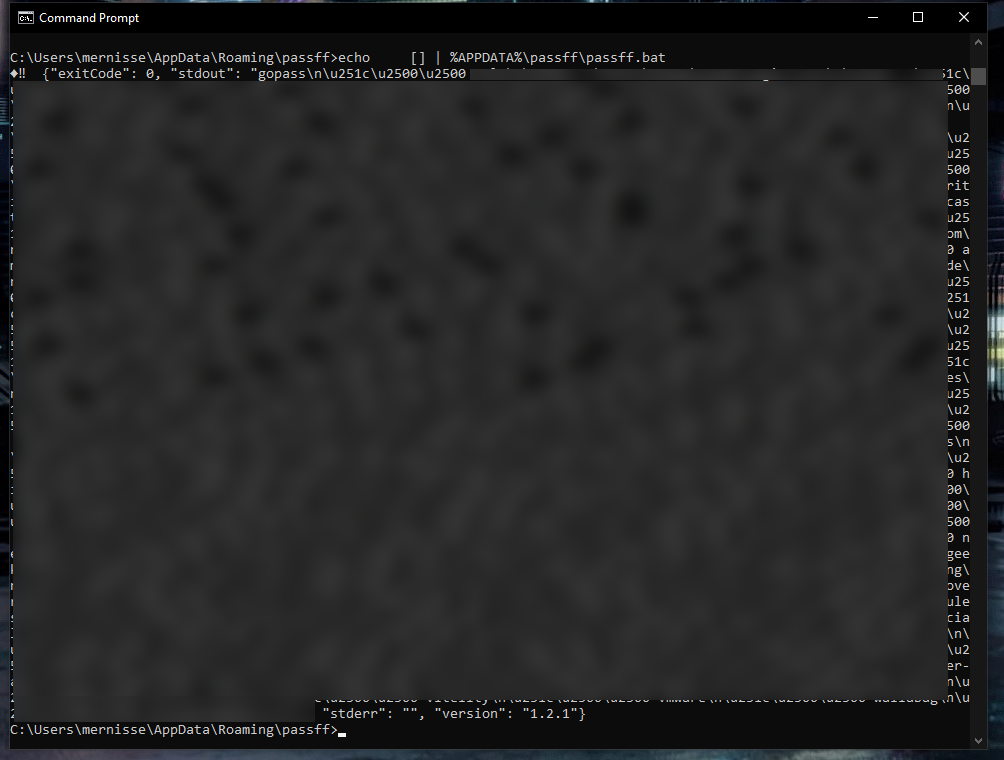 A scary pile of something that ends with subprocess.call

Make sure you took the export PATH= part out of the passff.bat. You want the PATH you set waaay back up in the prerequisites section, not the one that the install_host_app.bat created for you. 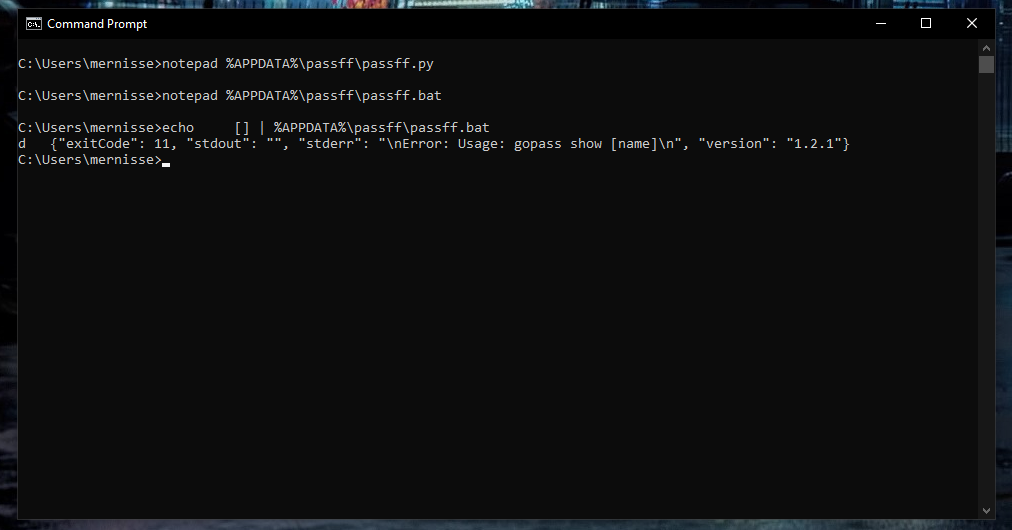 Make sure you changed the show to ls in passff.py. In my version it was around line 63.

I hope this helps someone, most especially Future Me.