There was much rejoicing this week as it was time for a new work laptop and that means I was finally able to get rid of one of the worst laptops Apple ever made, the regrettable MacBook Pro 13" with the Magic Keyboard and Touch Bar. I am quite picky about keyboards in general as it is the primary method that I interact with computers. While many people may prefer touch interfaces or gestures I find the keyboard to still be the most efficient and expedient input device we have. I was spoiled, growing up with IBM PC keyboards and then eventually moving to IBM Thinkpads. They really set the bar for keyboards in my life and everything ends up being compared to them. All that is to say that the Magic Keyboard with Touch Bar is the worst keyboard I've ever used. The last 2 years I've been mostly working from home using an Apple USB keyboard and have spared myself the most of the frustration and hatred of the vile thing.

The laptop is an aluminum slab like most Apple products in recent memory. It feels nice to hold and type on. The display hinge feels just right and the magnetic closure is firm but doesn't feel like you are in danger of losing a finger. The finish feels soft but grippy enough to not really feel like I need a case to carry the laptop around securely. I have high hopes that the new moulded feet fare better than the pathetic clip-on jobs that they've used since the original Unibody models that I've broken off every MacBook Pro I've had.

The slightly thicker and less rounded case makes the laptop feel a little more substantial than the 13" but still more svelte than the 15". I'd say that broadly speaking the laptop continues Apple's long history of excellent mechanical design and finally tilts back towards ergonomics instead of always having to be the thinnest and lightest. I think this is the correct trade-off.

The keyboard is such an improvement I'm tempted to spend another paragraph ranting and raving about how bad the old one was. The key travel is a little short for my taste but well within the acceptable range for a laptop but the end of travel click is chefs kiss 🥰 perfect. The fact that it is a full size keyboard as well is excellent. The anodized well it sits in adds to the feeling that they actually cared about the people using it this time. It also may serve to keep the keys from smearing finger-oils onto the screen when closed to though time will tell on that particular point. I'd say it's the best keyboard I've used on a Macintosh computer... ever.

Honestly there's nothing to write home about with the display. Apple calls this new display the Liquid Retina XDR and assures us that it is the new hotness and frankly it's... fine? It is a LED backlit IPS LCD panel, so basically the same technology as all but either the cheapest or most expensive modern displays. They may have improved the anti-glare coating and done some fancy stuff with the back-light driver but at the end of the day it seems... just fine. The contrast ratio seems a little better than my 2015 15" Retina (I'm a dark mode aficionado) but not noticeably better than the 27" HP 27q 2K IPS monitor I use. It remains to be seen how well the anti-glare and ambient light sensitive back-lighting works since I've not had much of a chance to use it outdoors, but I am not holding my breath, that's a really difficult environment for any display. The notch for the camera is mostly invisible but if you do something to expose its presence it is somewhat jarring. Given that the laptop is only about 3/8" bigger than the 13" was I would have opted to make the lid a teeny bit taller and put the camera outside of the panel's border instead. 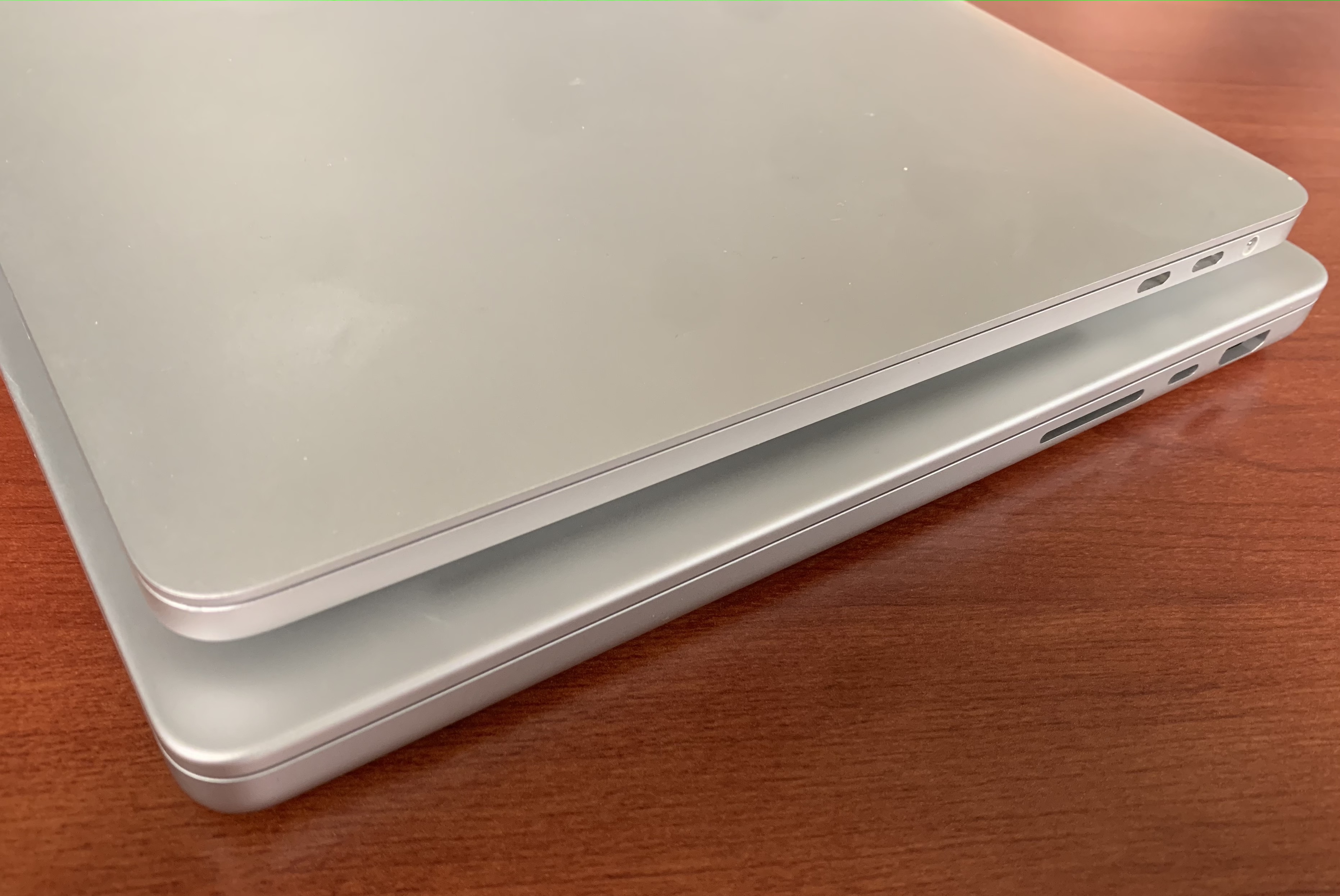 I was happy to see the return of the MagSafe power connector and the SD card reader. Time will tell if the MagSafe 3 is an improvement over the MagSafe 2 which suffers from several design problems. Initial impressions are good though, the braided cable cover seems more robust than the moulded strain relief of the MagSafe 2 that keeps shredding and failing. So far the magnetic attachment seems better that the rather anemic MagSafe 2 but it has not spent enough time on my lap to really gauge. I was happily surprised to find the ability to charge via USB-C has been retained. This means all the USB-C PD chargers I've scattered around the house and office over the last 3 years will continue to provide service. I expect to have to replace my chargers (or at least the cables) every time Apple changes plugs. The only real grip I have is that I'd like the HDMI port to be replaced with either another USB-C port or a USB A port. I've switched all my displays over to USB-C/DisplayPort so the HDMI port is just a waste.

In many ways this is the best laptop I've seen out of Apple ever. The 14" is a nice size bump for the low-end, remaining very portable but also quite usable in the lap. Have I mentioned the keyboard is really damn good? 😆 Most of my work computer usage falls into the office productivity category so as far as the M1 Pro — it's fine. It doesn't feel crazy fast or anything compared to the Coffee Lake i7 I had in the old one. These days it's more about JavaScript performance than it is hardware performance so frankly that's not surprising. As far as software macOS continues its decline towards an inevitable death at the hands of iOS so while I still find myself loathe to give up the 15" Retina MacBook Pro which is still running Catalina as my primary personal computer that's not the fault of the new hardware.