Last weekend I finally had the opportunity to get out and fly my first dual cross country. For those who aren't versed in the bowels of the FAA's flight training requirements a 'cross country' is a flight in excess of 50 Nautical Miles from your 'home' airport. The dual means I had my instructor along as opposed to the 'solo' variety which is still coming up. We planed to fly KSDC SYR KRME then KRME GGT KSDC. 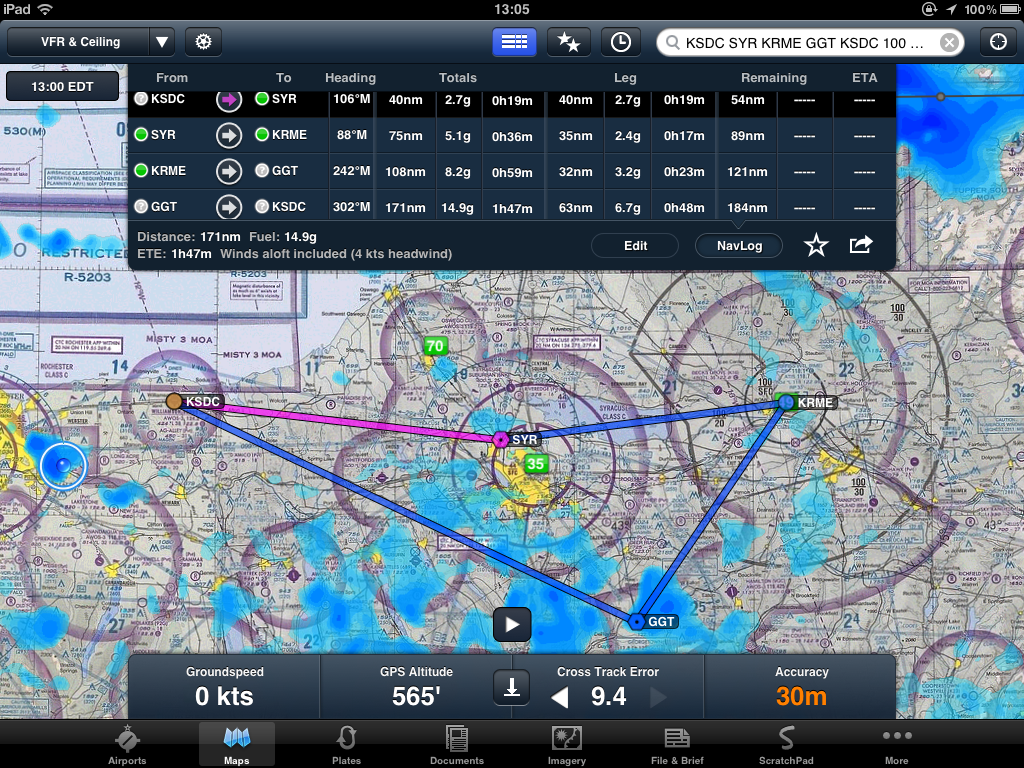 They say that no plan ever survives the first confrontation with the enemy. This was indeed quite true.

According to my notes we took off and made it up over the airport and on course at ten after noon. On our way up to 5,500ft for the cruise out I was able to get myself situated and on course without too much trouble and things were going pretty well. Because the climb took a little longer than I had expected we were a couple minutes behind my planed ETA but after all was said and done only about 5 minutes, so all the planning work was a great success. I was able to fly the route well enough that I actually got to see the Syracuse VOR antenna as I flew over it. ATC was busy but very helpful all the way in and even though I train from a non-towered airport and almost never talk to ATC I was reasonably comfortable on the radio and didn't get yelled at by anyone this time.

Sounds good so far, no?

I got cleared to make a left traffic pattern (making left turns around the runway for runway 33 at KRME (Griffiss International) and eventually cleared to land in the #2 position following another Piper Cherokee. It has been a long time since I've landed (about 3 months) and even longer since I've had a stiff crosswind landing so to say I did less than excellent would be kind. At the prompting of my instructor (more like him grabbing the throttle and telling Rome tower that we were going around) we went around and made right traffic (the standard published pattern for runway 33 at KRME) to have another go at it when the aircraft who was #3 (behind me to land) in the pattern pipes up with "Cherokee blahblah (I have forgotten his tail number) declaring an emergency on the runway." After a few quick heartbeats the tower controller asks what the nature of the emergency was and the pilot replies with "I've crashed"... more heartbeats "I'm ok". KRME used to be an Airforce Base and as such has an 11,800' (2.2 miles of glorious concrete) runway and the little Piper I was at the helm of doesn't exactly haul so I was barely turning crosswind this time and still couldn't see the runway behind me to assess what had happened. There was more chatter between the tower and pilot and then the tower informed me that we wouldn't be able to land and offered to hand be back to Syracuse ATC so we could be on our way elsewhere. My instructor and I decided that since we had plenty of fuel and time we'd just go ahead and fly the rest of the plan, in this case down to Georgetown and back to Sodus. We got back with Syracuse Approach and reactivated flight following, closed my old flight plan and opened a new one.

Not all that bad though right?

Turns out the next problem was an unexpected link in the chain. Up until now I've had at most about an hour and 10 minutes at a time in the little Pipers and have not had any problems with, ahem, 'pilot comfort' but as we passed over the Georgetown VOR (GGT) I started to feel the strain of the mission and my frame (I'm a little bigger than what I think Piper Aircraft had in mind in 1971 when they built the 140) was starting to take it's toll.

A quick scan ahead showed reasonably good weather. We were cruising along at 4,500' and there was line of scattered clouds ahead of me at about 5500 with tops at around 7000. Under the clouds it was getting a little bumpy and that was really starting to wreak havoc on my back. After a bit of debating about climbing up to 8500' to get over the clouds or taking a break I opted to make a left and head into Skaneateles (6B9). A quick chat with ATC to let them know we were diverting followed shortly by what I must say was a much more serviceable landing and I was out of the cramped cockpit and stretching out in the mid-day sun. If I was not convinced about how awesome flying was before, this would have totally sealed the deal. And it was only about to get better.

After a short break we decided it was time to head home. It was such a nice day that we decided that the formal cross country flight planning process wasn't really necessary so we briefed a plan like it was a local flight (take off, fly north to Lake Ontario, turn left before you are over the water and then Sodus will be straight ahead) and blasted off. 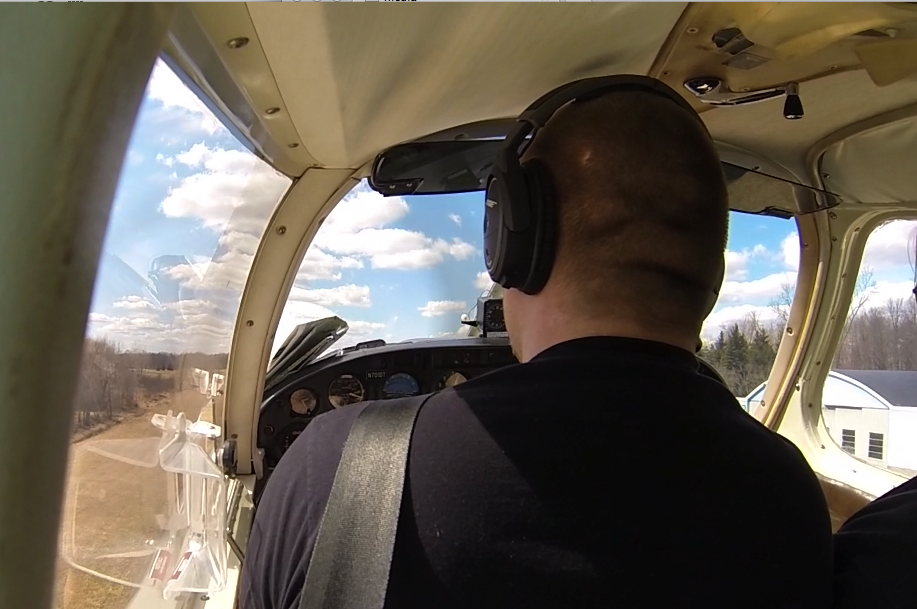 The flight back was so much better. I was concentrating so hard on trying to execute on my plan, coordinating the radios, flying, navigating, picking altitudes, prepping for the next phase of flight and all the other stuff that you have to do that I wasn't really enjoying myself all that much. But now with a large amount of the pressure off and the ache in my back gone I was able to relax a little bit and enjoy the flight.

The funny part? I was must tighter on altitude and heading than I was when I was stressing about it. I timed the descent from 3500 down to the pattern altitude at Sodus (1100') perfectly, leveling off right as I rolled into the pattern and despite being a little high on final I hooked up a really nice landing as an excellent way to cap off an otherwise lovely day. So what had started off being a simple there and back again ended up looking more like this: 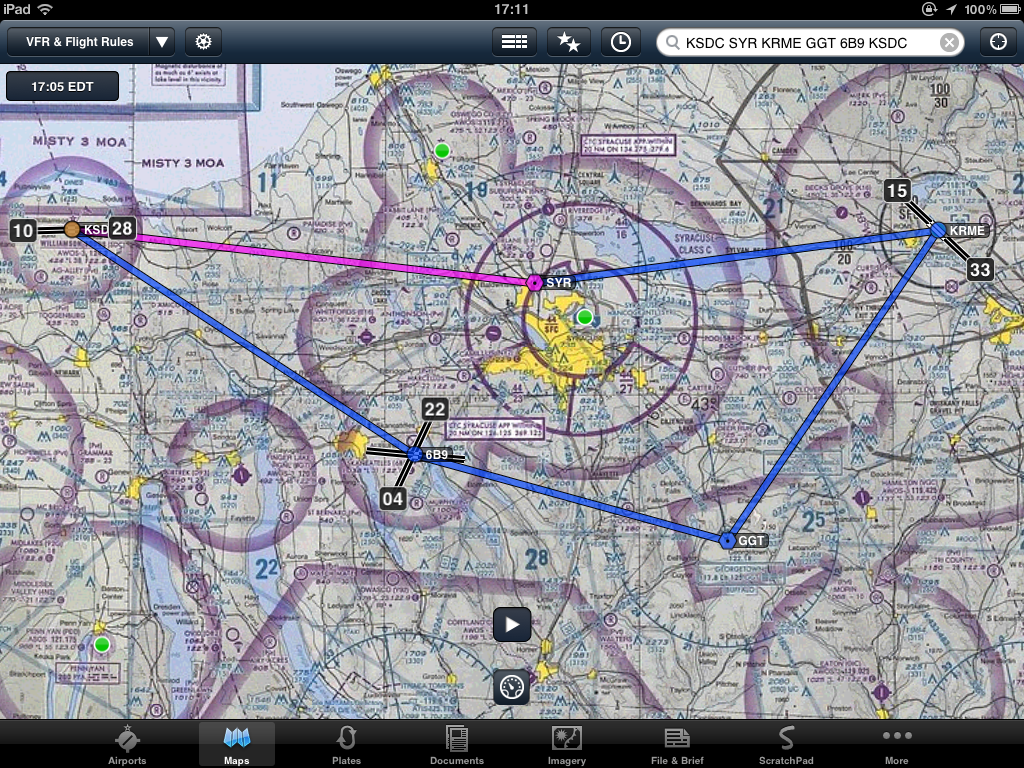 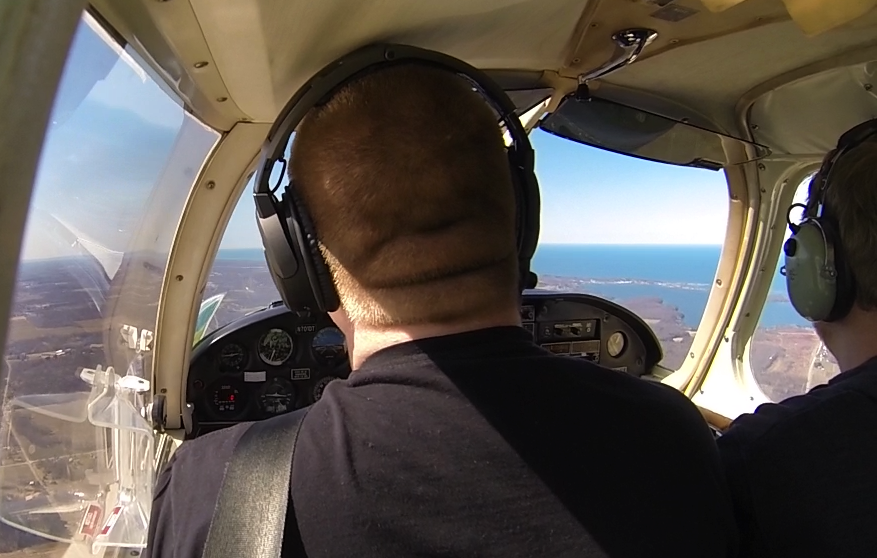 Sometimes the best laid plans turn out to be a really good day.